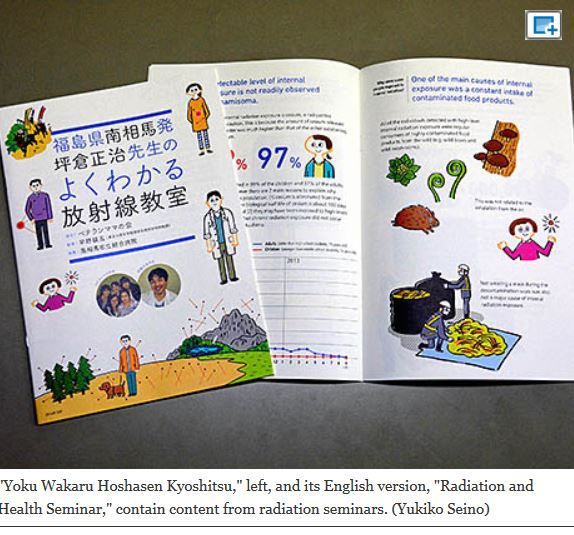 MINAMI-SOMA, Fukushima Prefecture--Mothers living near the stricken Fukushima No. 1 nuclear plant have compiled a booklet offering basic knowledge about radiation and explanations addressing safety concerns arising from the disaster.

The booklet, titled “Yoku Wakaru Hoshasen Kyoshitsu” (Radiation and Health Seminar), is available in both Japanese and English and was created by the Veteran Mothers’ Society, which consists of five mothers from the city of Minami-Soma.

The members, some of whom are former high school classmates, decided to create the booklet “for children’s sake.”

The information incorporates lessons learned from doctors at seminars the group organized following the accident at Tokyo Electric Power Co.’s Fukushima No. 1 nuclear plant in March 2011.

Amid the confusion and fears over radiation after the disaster unfolded, the mothers convened their first seminar for children and guardians in December 2011. They invited Masaharu Tsubokura, a doctor of hematology from the University of Tokyo’s Institute of Medical Science who had been providing consultations at the Minami-Soma municipal general hospital.

Other physicians later joined the effort to spread accurate information about radiation, and the mothers have held the sessions once or twice a month.

In the seminars, the children peppered Tsubokura with questions, such as “Can I touch my pets?” and “Is it OK to lick the snow?”

Ikumi Watanabe, the society’s 54-year-old vice chairwoman, recalled that Tsubokura’s explanations “were spoken in an easy-to-understand manner so the information popped straight into our heads. It was nice that we could talk with him on the same level and in person.”

Even now, the nature of the questions has not changed much.

“People have felt pressured not to talk about radiation, and some mothers have finally gotten the information only now, more than three years after the accident,” Tsubokura said. “I hope I can help them make decisions without thinking negatively about themselves or losing their self-confidence.”

In addition to basic knowledge, such as the differences between external and internal radiation exposure and between becquerels and sieverts, the booklet answers questions like: “Can radiation be transmitted from one person to another?” and “Is the tap water OK?”

Inquiries to the Veteran Mothers’ Society can be made via email (beteranmama0808@gmail.com).