Michael Mariotte on the future of energy If you think you’ve been seeing a lot more pro-nuclear propaganda in the media than usual in the past couple of weeks, well, it’s not your imagination. The nuclear industry and its champions are out in force, publishing articles and appearing in the media wherever and whenever they can in what may be a last-ditch effort to convince the world–or at least its leaders–that nuclear power is the answer, or one answer, to our climate crisis. As one writer put it yesterday, “At the Paris Climate Summit (COP21), the global nuclear lobby is in overdrive.”

If it all smacks a bit of desperation–and a lot of the pro-nuke pieces out there right now verge on the hysterical, with blatant attacks on those of us who envision a clean energy future–well, that’s not your imagination either. That’s because there is no global consensus on nuclear power. Some nations are against it entirely while a relatively few others are ardently pro-nuclear, with most–including the U.S.–somewhere in-between. And that means, by the very nature of the COP 21 talks, that nuclear isn’t getting what the industry needs; indeed, so far at least, nuclear is simply a non-factor.

Still, it’s important to examine and if possible refute the pro-nuclear assertions. It’s important to prevent them from taking hold at COP 21, or afterwards, because making large-scale investments in nuclear power as a climate solution would make real carbon reductions more difficult to attain. Nuclear would set the world on the wrong path, and that would prove disastrous. Fortunately, refuting nuclear advocates’ arguments becomes easier and easier with the passage of time. Not only are most of the industry’s positions fantastical, but the concept of a world powered 100% by clean renewable energy is no longer seen as a hippie pipedream but as a necessary and, more importantly, achievable goal at every level–from individuals to large corporations to cities large and small to entire nations.

Leading the nuclear pack of course, by virtue of respect for his work on climate, is Dr. James Hansen and a small band of cohorts in the climate science community. At his press conference in Paris late last week (background here) and a companion piece published in The Guardian Thursday, Hansen et al made their familiar argument that nuclear must be considered a climate solution and that the world must rapidly develop “…next-generation nuclear power with a closed fuel cycle (where spent fuel is reprocessed)…”

A big part of that argument is their belief, which seems to be based mostly on International Energy Agency (IEA) reports and projections, that renewable energy currently provides only a tiny part of global electricity supply and that renewables cannot scale up rapidly enough to replace fossil fuels. Nuclear, they claim on the other hand, can do so. According to Hansen, et al, “For example, a build rate of 61 new reactors per year could entirely replace current fossil fuel electricity generation by 2050. Accounting for increased global electricity demand driven by population growth and development in poorer countries, which would add another 54 reactors per year, this makes a total requirement of 115 reactors per year to 2050 to entirely decarbonise the global electricity system in this illustrative scenario. We know that this is technically achievable because France and Sweden were able to ramp up nuclear power to high levels in just 15-20 years.”

If Hansen and his friends were correct, perhaps the argument would have merit. But they’re not.

First, the world has never built 115 reactors per year, much less come close to sustaining such a level for 35 years. The chart at the top of this page shows that, in fact, worldwide we’ve never even hit 40 per year, and in only four years–all during the nuclear go-go years of the 1970s– did we even top 30 new reactors. Note that the chart shows reactor construction starts, not completions–a lot of those starts, especially in the U.S., were never even finished.

And note that Hansen et al don’t take into account the reality that by 2050, most of the existing reactors will have reached the end of their licensed lifetimes and will be closed, so there are another 400+ that would need to be built under their scenario.

The costs of attempting such a program would be astronomical. Not only are the reactors themselves the priciest means of electricity generation available today, but the costs of attempting to build an infrastructure capable of even a fraction of that many reactors would be prohibitive. Sure, there are costs involved with clean energy too; no one ever said addressing the climate crisis will be cheap (but we do, in fact, say a clean energy system will be economically beneficial), but at least it doesn’t need the kind of infrastructure (giant complexes capable of forging reactor pressure vessels, huge expansion of nuclear regulatory agencies, etc) that nuclear does.

To look at this another way, consider: in the 60 years since the dawn of the commercial atomic age, the world has built and operated fewer than 600 nuclear reactors (there are 437 currently operable). Hansen, et al. argue this track record proves the world can successfully build and operate 4,025 more reactors in the next 35 years. The history proves exactly the opposite.

Clearly, however, the world could build more than we are doing now. Not enough to close a lot of coal plants or make a significant dent in carbon emissions, but we could build more. Do we need to? Can renewables really not scale up in time?

If one relies on IEA reports and projections, it’s easy to see why you would think renewables can’t handle the job. The IEA’s World Energy Outlook shows that for 2013, renewables including large-scale hydro supplied only 4% of the world’s primary energy (not just electricity, analyzing this way gives nuclear only 5% of primary energy). By 2040, the World Energy Outlook doesn’t see much change: renewables are projected to supply 8% and nuclear 7%.

There are two problems here. First, we need to report and project electricity, not primary energy: nuclear reactors provide only electricity and so do most renewables. The second problem, as we’ve pointed out before, is that the IEA has proven invariably wrong when it comes to projecting the growth of renewables.

Renewables now provide 22.8% of the world’s electricity–which even the IEA has been forced to admit places renewables as the second largest “fuel” source, behind only coal.  So it’s not renewables that are the small fish in the pond, it’s nuclear. In other words, nuclear power would have to scale up more rapidly than renewables to make a difference, not the other way around.

We’ve reported numerous times on investment bank studies showing that renewables are where they want to put their money. Here are two more from Goldman Sachs: one projects wind and solar power will provide more energy over the next five years than the shale gas (read: fracking) revolution has over the past five years.  The other says the most effective investments to reduce carbon emissions are four existing technologies: solar, onshore wind, LED lighting and electric cars.

That these are existing technologies is important. Hansen et. al.’s nuclear-first approach requires use of “Generation IV” technologies that don’t exist. The reality is that we have the tools to effectively address the climate crisis, we just need to use them. Bill Gates made a lot of headlines last week with his “Breakthrough Energy Coalition” fund to come up with new energy solutions, including “advanced” nuclear. It’s not that innovation isn’t welcome (and there remains plenty of innovation in clean energy technologies), but what’s needed most right now is large-scale deployment of the innovations of the past few years. These, such as the technologies identified by Goldman Sachs, are already cost-effective and climate-effective. So why not use them?

But if we were to embark on a major new nuclear development and construction program, the economic resources to deploy the clean energy technologies would be dangerously depleted. “All of the above” always sounds reasonable to the public–why not do everything we can?–but it’s not only unrealistic, it’s irrational: since resources are not unlimited, choices are required and we need to focus resources on what works the best and the most cost-effectively. And that is renewables and efficiency, backed up with electricity storage (which we would argue Goldman Sachs should have included as a fifth effective investment).

Fortunately, the message is beginning to get through. 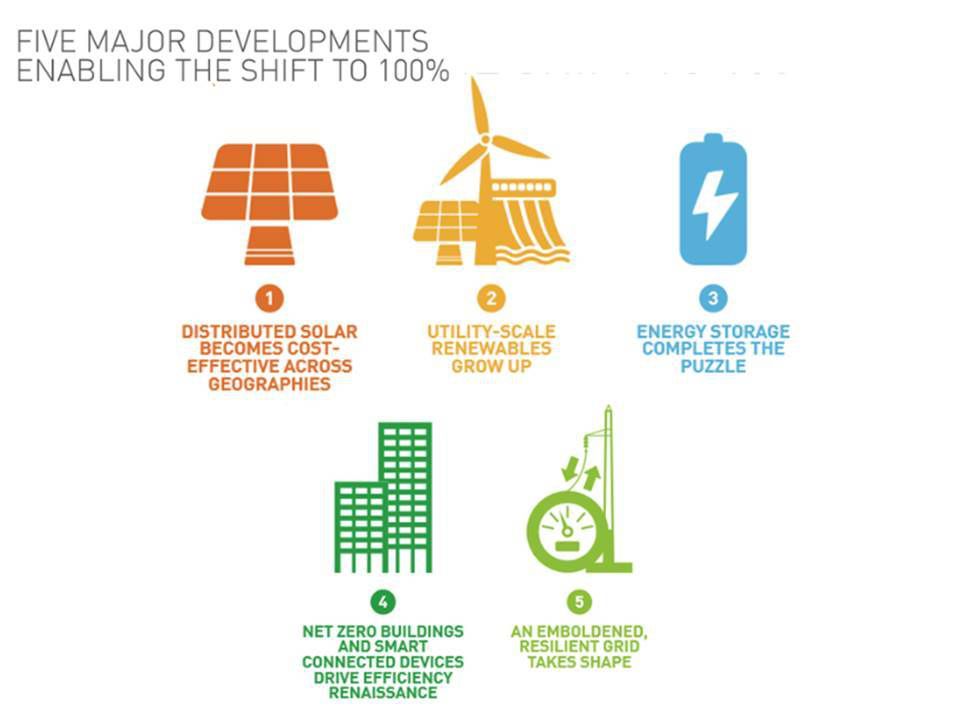 All of this is being driven by the five factors in the graphic to the right (click to enlarge). Electricity storage was the missing link. While large-scale (30-40%) use of variable renewables is possible even without storage, 100% renewables was not. But the rapid growth of storage technology coupled with its equally-rapid decline in cost makes that goal both achievable and affordable.

There are more signs. Coal use is already dropping faster than anticipated.  The U.S. Energy Information Administration (EIA), not quite as bad at projecting renewables as the IEA, but almost, suddenly added 30% more solar capacity in the U.S. because they’ve finally started counting rooftop solar.  Contributing to the nuclear industry’s hysteria in Paris this week is their knowledge that the announced early shutdowns of the Pilgrim and FitzPatrick reactors (on top of five closed reactors in 2013-14) and reactors in Sweden won’t be the last such announcements.

A 100% renewable energy system is no longer far-fetched. It’s being held back not by inadequate technology, not by an inability to scale up rapidly, but by the still-powerful–but decreasingly so–fossil fuel and nuclear interests. As their fortunes begin to fade, the political and economic power of those interests is weakening, but it must be weakened further.

The danger for the nuclear industry and its apologists is not that a massive clean energy campaign won’t work, that renewables can’t scale up quickly enough, that they can’t reduce carbon and methane emissions fast enough, but that such a campaign will work. Because that will mean that nuclear, and its myriad of other environmental and economic deficiencies, simply aren’t needed. And all the evidence shows that is, in fact, the case. Nuclear power is not needed to reduce emissions. And so why would anyone want to generate more lethal radioactive waste and subject the world to more permanently uninhabitable zones from the occasional and inevitable nuclear meltdowns? Obviously, the nuclear industry wants to protect its own economic interests. But for the rest of us–and that’s nearly everyone–a nuclear-free, carbon-free system makes perfect sense.