One of the more famous aspects of American cold war culture of the 1950s was the propaganda campaign for civil defense planning, consisting of duck-and-cover drills at schools, tests of the emergency broadcasting system,[1] and sales promotions for backyard fallout shelters.

The nuclear arms race presented a dilemma for planners. The public would feel terrified of a nuclear attack if the government did nothing to teach them how to defend themselves. Yet if the government attempted to teach the public how to survive a nuclear war, they would be all the more terrified by the realization that most people wouldn’t survive a nuclear war and the survivors would envy the dead. Many people of the time fell for the government propaganda and bought fallout shelters, but not everyone. Looking back on the era, we find it easy to laugh at the absurdity of the “duck-and-cover” drills, but most people probably had a jaded view of it even at the time, just as they did toward the color-coded terror alerts that followed the terrorist attacks on Washington and New York in 2001. Another aspect of the dilemma was in the fear of the enemy’s reaction to government efforts to prepare citizens for nuclear attack. It seemed like it would be a good idea for the president to order a nation-wide week of drills so the country could be ready for the real thing. But doing so might have made the Soviets think an attack was imminent, and they might have decided to pre-empt this plan with their own first strike. What to do? The only solution, obviously, was disarmament, but when people rule out doing the obvious thing, they feel they are confronted with a “dilemma.”

In 1994, Guy Oakes revealed in his book The Imaginary War: Civil Defense and American Cold War Culture that the effort to prepare the public to survive a nuclear war was a conscious and entirely cynical ploy to keep the American public from objecting to the nuclear arms build-up and the policy of deterrence. He wrote in his conclusion:

In the 1950s, no one in government was more ruthlessly clear-sighted than Vice President Richard Nixon in his understanding of the connection between a civil defense policy of deception and mendacity and the higher moral exigencies of the Cold War. In the NSC meeting on March 27, 1958, Nixon dissected with brutal consistency the rationale and limits of government support for fallout shelters. Speculative calculations concerning how many millions of Americans would die in a nuclear war, Nixon observed coolly, were beside the point. From the perspective of national survival, did it really matter whether the casualties numbered 30 million or 50 million? According to Nixon, this was a distinction without a difference. If 30 million Americans failed to survive a nuclear attack, “there would be no hope of the United States surviving.”

American security rested not on the passive defenses of civil defense, but on the active defense provided by the American nuclear deterrent. Therefore, why waste any money at all on civil defense? Nixon’s answer was that the government had to make some gesture in the direction of a shelter program “because the country demands it.” It was necessary to maintain the public illusion of security through civil defense. Otherwise, the tolerance for deterrence would collapse. Accordingly, the government’s civil defense policy was clear: The state should spend whatever was necessary, but not a penny more, to sustain this illusion. Because a shelter program could produce only the appearance of security and not security itself, “we should do as little as we can to satisfy this demand.” On these grounds, civil defense was marketed to American people as self-protection for survival. It was a necessary illusion: indispensable to the moral underpinning of national security, but ultimately irrelevant to survival under nuclear attack.[2]

This is all history, and perhaps it seems irrelevant, but if we look carefully, we can see that a similar dilemma and a similarly cynical policy of necessary illusions has been maintained for much longer by the nuclear energy industry.

The premature, rapid decommissioning of the Fukushima Daiichi NPP caused a crisis in the global nuclear industry. When the presumed impossible event proved possible, no one had developed procedures for evacuation or for the distribution of potassium iodide (KI) pills to protect thyroid glands from radioactive iodine. Thus, after the catastrophe, nuclear regulators and energy utilities throughout the world decided they had to convince the public that they would learn the lessons from the “accident” and carry out measures to protect the public during an emergency. Now they were going to develop evacuation plans, carrying out drills involving thousands of citizens in some places, and creating a system for timely delivery of potassium iodide at the local level.

Of course, the reason this had never been taken too seriously before was the same reason President Eisenhower had for being ambivalent about alarming the public with civil defense drills. If residents near a nuclear power plant are put through evacuation drills and taught the importance of having access to potassium iodide, they might start to learn too much about this hazardous industry that operates in their neighborhood, and they might start to call for its abolition.

Response to a nuclear power plant accident is similar to the civil defense dilemma in another important way. The people in charge are just as cynical as Richard Nixon was. They know that the evacuation plans and the KI pills will be useless, or even harmful, in a real emergency. It is impossible to evacuate everyone in a timely manner, and no one knows how the weather, time of day, triggering natural disaster or organizational failings would affect the best-laid plans. If a leak of radiation seemed imminent, operators would continue to hope that it could be contained until it was too late to tell people to take their pills or run away. Critical hours or days of denial would pass, then they would be just as well protected by leaving the area or consuming uncontaminated food and water. There would be those who would get injured or killed in the evacuation, or those whose health would be damaged by the dose of potassium iodide itself.[3]

The nuclear engineers and scientists who work in the nuclear industry-regulatory complex know all of this, and they also know that the evacuation zone radius and the tolerable limits of contamination will be set according to the size of the population affected. The smaller the population, the more “generous” they can afford to be with precautions. In spite of all this knowledge, they now cynically go along with the need to carry out a nuclear energy civil defense plan “because the country demands it,” as Richard Nixon said. It’s a bureaucratic requirement now, a performance for public consumption only. Just as we knew about a nuclear attack, if it really happens all bets are off and there is no way to stay safe. Substituting a few words from Guy Oakes’ description of civil defense policy during the Cold War, we could say it’s a necessary illusion: indispensable to the moral underpinning of continuing to operate nuclear reactors, but ultimately irrelevant to survival under a nuclear meltdown.

In Japan, one of the regulatory hurdles for the nuclear reactor restarts is that operators and local authorities have to have an evacuation plan and a plan for distributing potassium iodide, and they have to carry out drills involving the local communities. Reports on these drills have revealed what a desultory exercise they are.[4] Few people come out for them, and the ones who do could be compared to the suckers who bought fallout shelters for their backyard in the 1950s. 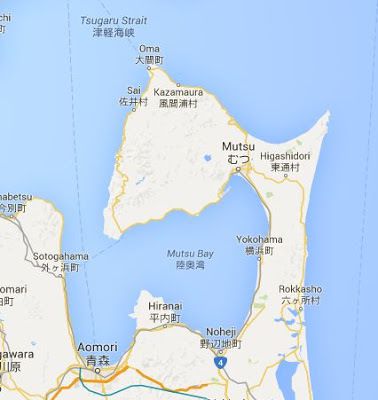 In the event of an accident, residents living north of the nuclear fuel reprocessing
facility in Rokkasho would supposedly be able to evacuate southward.

As the drills are conducted, their flaws become readily apparent to all participants. In many cases, residents would be stuck on peninsulas where the only land-based evacuation route would be past the damaged nuclear plant. The hopeful plan is to evacuate residents before “allowing” the broken reactor to release radioactive substances into the atmosphere. The plans are also ridiculously hopeful in that they assume there will be no landslides, snowstorms or shortage of personnel at the power plant. Nuclear engineer Arnie Gundersen pointed out that the Fukushima disaster happened during the 9-5 working day when the plant was fully staffed. If it had happened at night, it is doubtful that, in the aftermath of the earthquake and tsunami, the brave “Fukushima fifty” would have been able to go to the plant from their homes, even if they had wanted to go there instead of fleeing toward safety.

The authorities have acknowledged that it may not be possible to evacuate residents past a nuclear reactor undergoing a meltdown, so they promise that rescue boats and helicopters will come. These plans are also overly hopeful because they involve the mobilization of civil servants and military personnel. Even if they were able to get to the area in time, this would consist of moving additional people into the danger zone, so there would be an increase in overall endangerment of human life. And it would be painfully obvious through the whole exercise that everyone fleeing or coming to the rescue would already be contaminated, and residents would be saying sayonara to their homes on two hours’ notice. All of this is done with utmost cynicism. The people who planned this charade know the drills are meaningless and they are content to devote the nation's resources to them, and waste the time and energy of thousands of citizens and civil servants.

Most disturbing of all is the degree to which the powerful and the dis-empowered have internalized and normalized the idea that people in rural areas must live with these dangers and be inconvenienced with evacuation drills so that city folk can have electricity that could be produced by safer means. However, we can see something positive in the fact that most people in the affected communities see through the absurdity of evacuation drills, whether they participate in the drills or not. Those who refuse to participate understand the situation the way Bob Dylan understood the futility of fallout shelters in the 1950s and 60s. He wrote in his autobiography [6] that he recalled many people from his hometown shutting the door on the fallout shelter salesmen who came around in the 1950s. This memory inspired one of the first songs he wrote, Let Me Die in my Footsteps, in which he sang of his refusal go along with the fallout shelter craze. Anyone watching the evacuation drills in Fukushima this year would agree with Bob: “I don’t know if I’m smart, but I think I can see when someone is pullin’ the wool over me.”