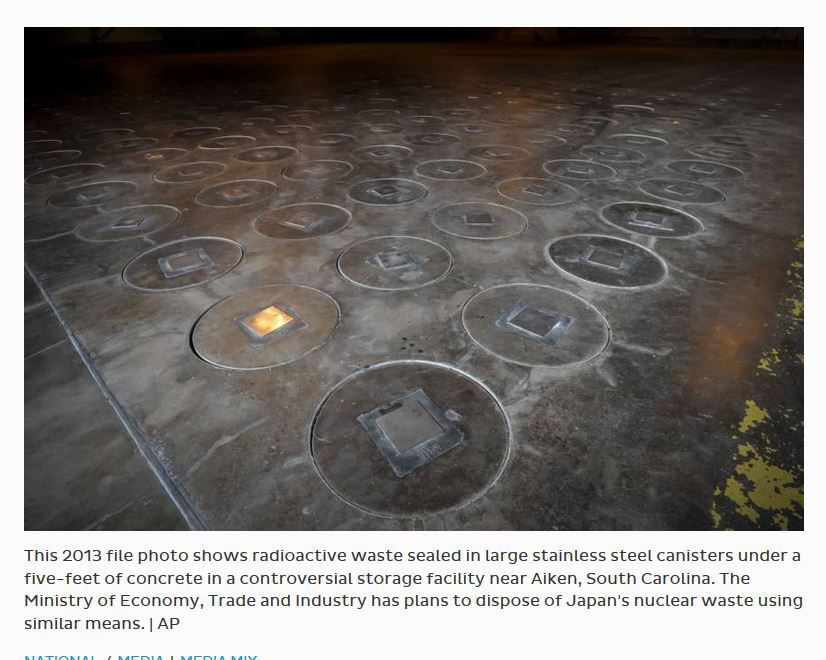 Taro Kono’s appointment as the new foreign minister is raising eyebrows. Though he hasn’t shown any indication that he will buck Prime Minister Shinzo Abe’s agenda, Kono is considered a leftish maverick within the Liberal Democratic Party, especially with regard to its nuclear energy policy, which he has opposed. In an editorial, the conservative Sankei Shimbun insisted he maintain the LDP line when the 30-year U.S.-Japan nuclear energy pact expires next year.

The pact’s ostensible purpose is to authorize the reprocessing of spent nuclear fuel for energy purposes so as to limit the amount of weapons-grade plutonium Japan can stockpile. This system has been stymied, however, by the decommissioning of the experimental Monju fast-breeder reactor and the shutdown of most of the nation’s nuclear plants following the Fukushima No. 1 meltdowns in 2011. Whatever reprocessing of spent fuel that has been done has been carried out in the U.K. and France and, of the 47 tons of extracted plutonium possessed by Japan, 36 tons are still overseas.

So the U.S. has no reason to worry about the prospect of Japan suddenly turning plutonium into bombs. Japan’s “peaceful” use of atomic energy, after all, was encouraged by America in the 1950s, when the horrors of Hiroshima and Nagasaki were still fresh in people’s minds.

But Japan’s long-term plan of recycling spent fuel into plutonium fuel has hit a wall, not only because of Monju’s failure, but also because of the continued postponement of the opening of the reprocessing plant in Rokkasho, Aomori Prefecture.

Nevertheless, two weeks ago, the Ministry of Economy, Trade and Industry (METI) published a map showing plans for disposing of the high-level waste that’s a byproduct of processing. The map illustrates possible candidate areas for waste disposal. “Suitability” is indicated by color, with green being the most suitable and orange unsuitable due to geological phenomena such as earthquake faults, volcanoes and ground water movement. The green areas are mainly on the coastline because ships will likely be used to transport the waste. Silver is used for areas not being considered because they may contain deposits of minerals that can still be exploited.

The map was drawn up so that the public would know the government still takes its nuclear energy program, as well as the stalled recycling plan, seriously, and most media outlets have conveyed those points. However, NHK has looked at the map and wondered if it has any real meaning. As the public broadcaster pointed out on its “Jiron Koron” explanation series, the waste will be kept underground for up to 100,000 years, buried 3 kilometers deep at the bottom of a series of deep tunnels.

Consequently, getting local governments to offer land for disposal sites is going to be very difficult. METI insists that participation is voluntary and has sent requests to 1,750 municipalities, but given the public’s allergy to nuclear power in the wake of Fukushima, NHK doesn’t seem to think anyone is going to raise their hand, even though acceptance comes with rewards: ¥2 billion for the initial two-year data study and ¥7 billion for the followup on-site study. After accepting those two deliveries of cash, a local government could still reject METI’s request. And even if it grants METI’s request, landowners will later have to be consulted and paid. At present the cost of disposal is estimated at ¥3.7 trillion, but it is sure to go up.

The plan is actually an old one, developed as part of the scheme to recycle spent fuel, a process that produces its own particular waste that is much more radioactive than the spent fuel itself. This waste is combined with molten glass and poured into steel canisters, which are eventually buried underground. According to international law, such waste is the responsibility of the country that owns the original fuel and cannot be exported for disposal.

Because of the delay with Rokkasho, Japan has had the U.K. and France do their recycling, and the waste has been shipped back to Japan along with the recycled fuel. It’s now sitting at the Rokkasho plant in refrigerated containers.

There is also a lot of spent fuel at Rokkasho waiting to be reprocessed, and the governor of Aomori, frustrated by the government’s equivocation, has been threatening to send it back to the reactors from whence it came if the plant isn’t opened for business. There are presently 18,000 tons of spent fuel in storage at the plants that produced it and there is no room left for any more.

The disposal plan is only theoretical as long as Rokkasho remains inoperable and fuel reprocessing delayed. Moreover, there has been no public discussion about what happens to all the spent fuel if reprocessing is abandoned, though there are media reports of a “feasibility study.”

NHK predicts “confusion.” The green areas will be studied for 20 years before their suitability is confirmed. Building tunnels will take at least another 30. By the time a disposal plan is achieved, present METI bureaucrats, not to mention the current captains of the nuclear power industry, will be deader than the waste they’re trying to get rid of. What the map actually represents is METI pushing the problem on to the next generation as nuclear reactors — if they are restarted as planned — continue to produce even more.

On July 29, the Tokyo Shimbun commented that the map does nothing to gain the public’s understanding, but perhaps the government is not yet that desperate. During a recent discussion on Bunka Hoso’s “Golden Radio” program, economist Takuro Morinaga said, “METI doesn’t seem to be in a hurry,” because it is counting on the failing finances of rural areas to persuade local governments to take its money in return for disposal sites.

“The best idea would be not to make any more waste,” added Morinaga, hinting at an alternative to the LDP’s pro-nuclear policy. “But that’s not how the government thinks.”