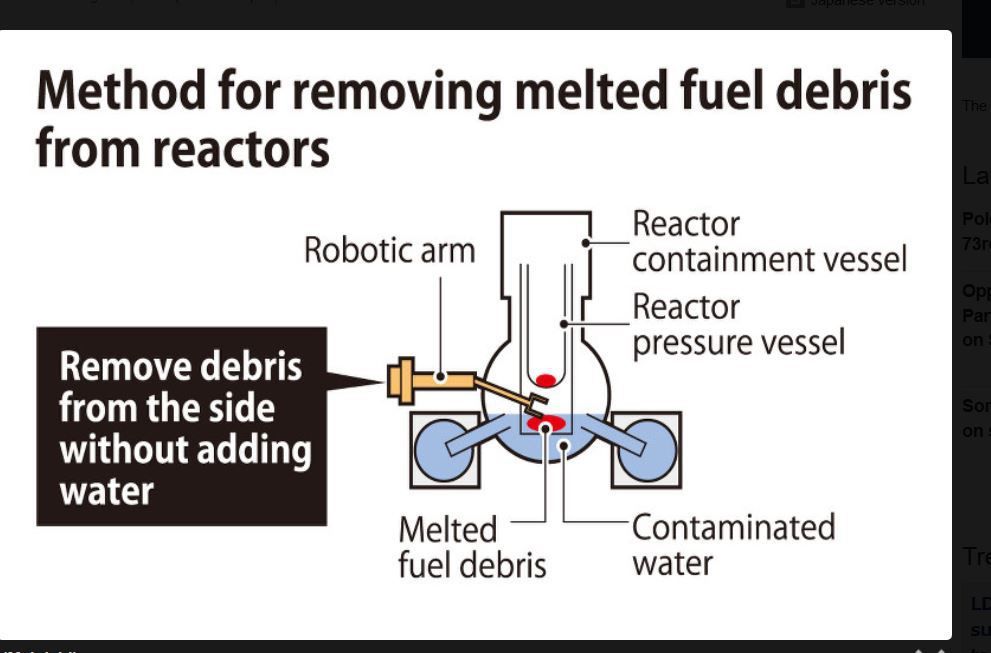 A method to remove melted nuclear fuel debris on the bottom of the containment vessels of Fukushima No. 1 Nuclear Power Plant's first, second and third reactors from the side was proposed by the Nuclear Damage Compensation and Decommissioning Facilitation Corporation (NDF) on July 31.

Hajimu Yamana, head of the NDF, which is tasked with considering how to remove fuel debris from the reactors, for the first time explained the organization's specific method proposal to the heads of local governments at a countermeasures for the decommissioning and handling of the contaminated water council meeting held in Iwaki, Fukushima Prefecture.

The method would focus on prioritizing the removal of debris from the bottom of the vessels from the side, using robotic arms and other remote devices while flushing water over the debris. However, ways to block radiation and countermeasures against the scattering of airborne radioactive dust still remain unsolved. The central government and Tokyo Electric Power Co. (TEPCO) plan to finalize ther policy to remove the debris and amend the decommission schedule in September.

The Nuclear Damage Compensation and Decommissioning Facilitation Corporation said on Monday that the method should be the first option for all 3 reactors that suffered meltdowns.

Fuel inside the reactors is believed to have melted in the 2011 accident and combined with the reactor structures to form fuel debris. The fuel in each of the 3 reactors apparently melted through their surrounding pressure vessels, and collected at the bottom of the containment vessels.

The corporation initially considered another fuel-retrieval method involving filling the vessels with water to block high levels of radiation given off by the debris.

But it now says this method is too technically difficult and risks exposing workers to radiation and leaks of contaminated water.

The corporation instead proposes that a remote-controlled robot be deployed through a pipe in the side of the containment vessel to retrieve the debris at its bottom.

The nuclear power plant at Three Mile Island in the United States is the only place where fuel debris has been retrieved. It was done using the submersion method.

If the Japanese government and the plant's operator, Tokyo Electric Power Company, decide to go ahead with the new removal plan, it will be the first time the dry method is used.

They want to decide on a removal method for each reactor by September. But they have to find ways to block the radiation and keep radioactive substances from being released.

State minister for economy and industry Yosuke Takagi says it's meaningful that a removal method is recommended, and that the government will base its discussion on the corporation's proposal.