Nuclear weapons: Where is the threshold? 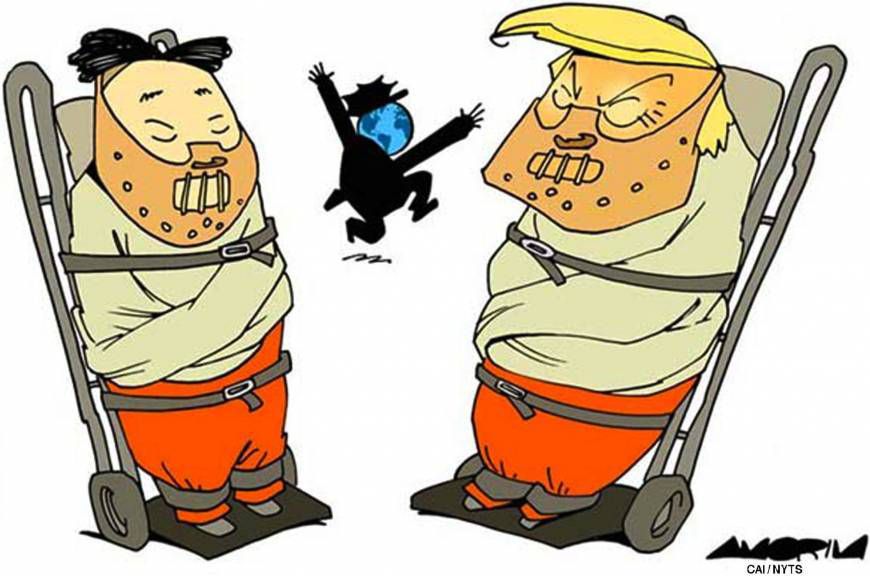 Will Trump lower the nuclear bar?

by George F. Will

WASHINGTON – The U.S. Air Force “sniffer plane” was collecting air samples off Russia’s Kamchatka Peninsula on Sept. 3, 1949, when it gathered evidence of radioactivity, confirming that the war-shattered Soviet Union had tested a nuclear device. The Soviets’ Aug. 29, 1949, test had come faster than expected.

Dating from the detonation at Alamogordo, New Mexico, on July 16, 1945, the basic science of nuclear explosions is more than 72 years old — three years older than the North Korean nation. Ballistic missile technology is more than 60 years old. The problems of miniaturizing warheads for mounting on missiles, and of ensuring the warheads’ survival en route to targets, are not sufficient to stymie a nation — consider Pakistan, whose annual per capita income is less than $2,000 — that is determined to have a nuclear arsenal.

North Korea has one and is developing ICBMs faster than expected and with ostentatious indifference to U.S. proclamations. On Jan. 2, President-elect Donald Trump scampered up the rhetorical escalation ladder, unlimbering his heavy artillery — an exclamation point — to tweet about North Korea’s promised ICBM test: “It won’t happen!” It did. North Korea’s most audacious act, firing a missile over Japan, came seven days after Secretary of State Rex Tillerson praised North Korea’s “restraint.”

Pyongyang’s “signaling” does not involve abstruse semiotics: It wants a nuclear arsenal, and as The Economist magazine says, the world’s unpalatable options are the improbable (productive negotiations), the feeble (more sanctions) and the terrifying (military pre-emption). Concerning the latter, there is no bright line, but there is a distinction to be drawn, however imprecisely, between pre-emptive war and preventive war. The former constitutes self-defense in response to a clear and present danger — repelling an act of aggression presumed with reasonable certainty to be imminent. The latter is an act of anticipation — and, to be candid, of aggression — to forestall the emergence of a clear and present danger.

When Trump threatened North Korea with “fire and fury like the world has never seen,” was he threatening to cross the nuclear weapons threshold? This has been contemplated before regarding North Korea. Former Gen. Douglas MacArthur, who had been fired by President Harry Truman for insubordination, handed President-elect Dwight Eisenhower a memorandum on how “to clear North Korea of enemy forces”: “This could be accomplished through the atomic bombing of enemy military concentrations and installations in North Korea and the sowing of fields of suitable radio-active materials, the by-product of atomic manufacture, to close major lines of enemy supply and communication. … “

MacArthur badly misjudged Eisenhower, whose biographer Jean Edward Smith says that during the Potsdam Conference (July 17-Aug. 2, 1945), when Eisenhower was told of the Alamogordo test — his first knowledge of the new weapon — “he was appalled” and “was the only one at Potsdam who opposed using the bomb.” Smith says: “As president, Eisenhower would twice be presented with recommendations from his National Security Council and the Joint Chiefs of Staff that the bomb be used; first, in Vietnam to protect the French at Dien Bien Phu, then against China at the time of the Formosa Strait crisis. Both times Eisenhower rejected the recommendations. As a former supreme commander, Eisenhower had the confidence to do so, where other presidents might not have. And by rejecting the use of the bomb, there is no question that Eisenhower raised the threshold at which atomic weaponry could be employed — a legacy we continue to enjoy.”

But for how long? The non-proliferation regime has been remarkably successful. During the 1960 presidential campaign, John Kennedy cited “indications” that by 1964 there would be “10, 15 or 20” nuclear powers. As president, he said that by 1975 there might be 20. Now, however, North Korea, the ninth, might be joined by Japan, South Korea, Taiwan, among others, unless U.S. leadership produces, regarding North Korea, conspicuously credible deterrence. The reservoir of presidential credibility is not brimful.

On Aug. 1, Sen. Lindsey Graham said that Trump had told him that “there will be a war with North Korea” if it continues to develop ICBMs capable of reaching the United States. “We’ll see,” said Trump on Aug. 6, responding to this shouted question: “Will you attack North Korea?” You?

Are Congress’ constitutional powers regarding war so atrophied that it supinely hopes for mere post facto notification? Ten months after Nov. 8, that day’s costs, until now largely aesthetic, are suddenly, although not altogether unpredictably, more serious than were perhaps contemplated by his 62,984,825 voters.