Can't stay more than 20 minutes on the roof 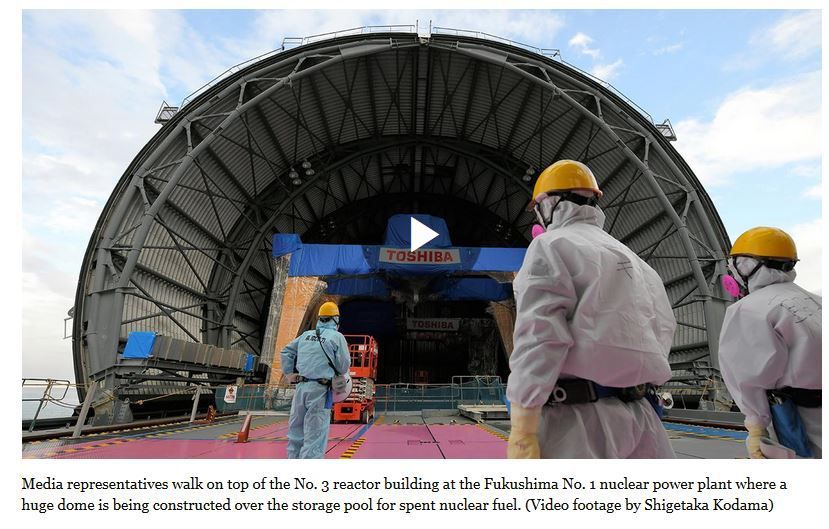 High radiation levels are still limiting recovery work at the Fukushima No. 1 nuclear plant, a stark reality that reporters saw firsthand when they observed efforts to remove risk factors there.

Media representatives were invited into the plant in early December to see construction work, with the building of a domed roof over the No. 3 reactor building as the main focus.

However, they were only allowed to stay on top of the roof for 20 minutes due to high radiation levels.

The roof is being put together directly above the storage pool for spent fuel. The dome is designed to prevent the spewing of radioactive materials when the fuel is actually removed from the pool.

The original roof of the No. 3 reactor building was severely damaged by a hydrogen explosion in the days following the March 11, 2011, Great East Japan Earthquake and tsunami, which led to the crippling of the Fukushima No. 1 plant.

Spent fuel still remains in the storage pools located on the top floors of the No. 1 to No. 3 reactor buildings.

Plans call for removing the spent fuel first from the No. 3 reactor building.

Although the dome will help prevent the spread of radioactive materials, building parts and other debris as well as some equipment have still not been completely removed from the storage pool, which holds 566 fuel rods.

The collapsed roof and walls were removed to allow for the construction of the domed roof, which began in the summer. The domed roof is about 17 meters high, and a crane was also installed under it in November.

Plans call for the removal of the spent fuel from the No. 3 building to begin in the middle of the next fiscal year.

Internal radiation exposure levels were measured before media representatives headed to the No. 3 reactor building. They were also required to don protective clothing as well as a partial face mask covering the mouth and nose from about 100 meters from the building.

Radiation levels close to the building were 0.1 millisieverts per hour.

An elevator installed into the scaffolding next to the reactor building took the media representatives to the roof, which had been covered with metal plates.

The so-called operating floor looked like any other newly constructed building roof, a sharp contrast to the twisted metal parts that covered the building shortly after the nuclear accident.

Tokyo Electric Power Co., the plant’s operator, captured video footage from within the reactors for the first time in July. Debris that appears to be melted nuclear fuel was found in various parts of the containment vessel.

To the north is the No. 2 reactor building, which avoided a hydrogen explosion. Beyond the building, cranes and other large equipment are working in preparation for the removal of debris from the No. 1 reactor building.

TEPCO officials cautioned media representatives about standing too long right next to the storage pool, which could be seen located about six meters below the roof. Debris was found within the pool while insulating material floated on the pool surface.

The radiation level near the pool was 0.68 millisieverts per hour. While that was a major improvement from the 800 millisieverts per hour recorded in the immediate aftermath of the nuclear accident close to seven years ago, it was still too high to allow for a stay of longer than 20 minutes.