Panel: Hokkaido at risk of huge earthquake over next 30 years 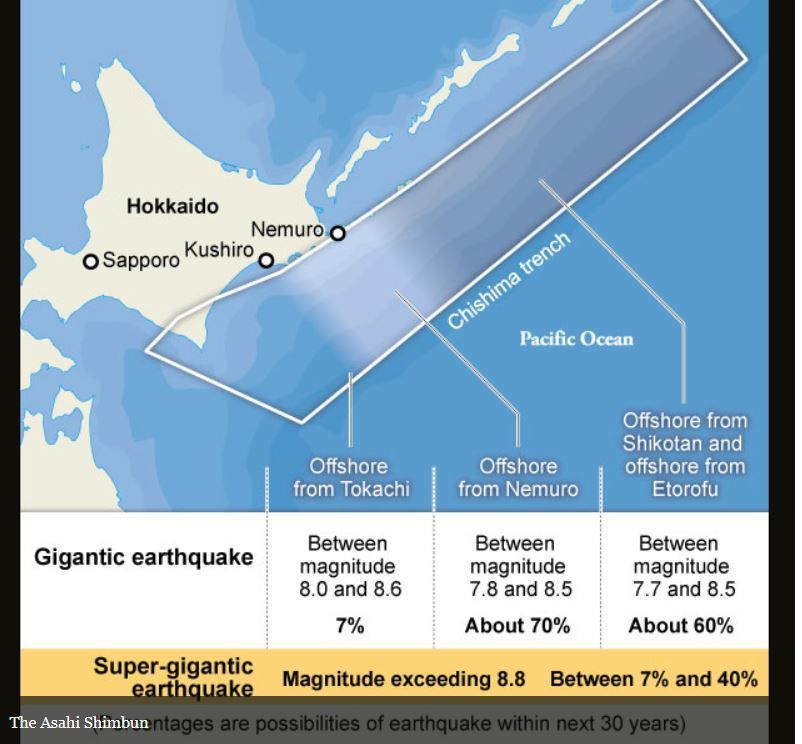 A government panel is warning of a “high possibility” that an earthquake the size of the 2011 Great East Japan Earthquake will strike the area south of Hokkaido within the next 30 years.

The Headquarters for Earthquake Research Promotion, announcing the first revision in 13 years of quake predictions along the Chishima trench, said Dec. 19 that heightened disaster preparations should be made because the area appears long overdue for a gigantic quake.

The panel said the possibility was between 7 and 40 percent of an earthquake with a magnitude exceeding 8.8 occurring in an offshore focus area extending from Tokachi in south-central Hokkaido to Etorofu, one of the four islands making up the disputed Northern Territories.

The panel said quakes of that scale have stricken the area at average intervals of 340 to 380 years, with the most recent one believed to have hit about 400 years ago. Panel members said the end of the average cycle had already been exceeded.

The March 2011 earthquake in the Tohoku region registered a magnitude of 9.0. The quake and ensuing tsunami wiped out communities on the northeastern coast of Honshu island, leaving nearly 20,000 people dead or missing.

“I hope disaster preparations are reviewed based on the possibility that a super-gigantic quake like the one that struck the Tohoku region could also strike Hokkaido,” said Naoshi Hirata, a seismology professor at the University of Tokyo and chairman of the panel’s Earthquake Research Committee.

The panel for the first time calculated the possibility of a quake similar in scale to the 2011 quake striking Japan’s northernmost main island.

The Cabinet Office next year is expected to release new damage projections for such a quake off Hokkaido.

In 2006, the Central Disaster Management Council estimated that about 700 people in Hokkaido and 200 in Honshu would be killed by tsunami triggered by a Hokkaido quake.

The Headquarters for Earthquake Research Promotion on Dec. 19 also issued possibilities for gigantic earthquakes within more limited areas along the Chishima trench.

Much attention has focused on the possibility of a gigantic quake striking along the Nankai Trough and devastating large parts of western Japan, a region much more densely populated than Hokkaido.

But the panel’s announcement underscores that a much wider area of Japan is at risk of a killer quake.

Researchers have uncovered details about damage caused by past tsunami in eastern Hokkaido, but such discoveries have only been made in the past few decades.

Studies into past quake damage have made clear that gigantic quakes have rocked Hokkaido 18 times over the past 6,500 years.

The Headquarters for Earthquake Research Promotion used strong language about the high possibility of a super-gigantic earthquake because the average cycle for such quakes ended long ago.

It is unclear how large such a quake would be, considering the panel’s conclusions were based on limited historical documents and data from the Northern Territories.

And because the cycles of earthquakes are highly variable, much more time could pass before a gigantic earthquake does strike off Hokkaido.

However, the panel’s view was based on the painful lessons from the Great East Japan Earthquake, in which research results were not completely reflected in disaster management plans.

In addition, earthquakes of smaller magnitudes than those listed in the panel’s announcement can still generate devastating tsunami.

The public should recognize that the entire Pacific coast of eastern Japan, including Hokkaido, is an area where earthquakes and accompanying tsunami have often occurred in the past.

(This article was compiled from reports by Takahiro Takenouchi and Eisuke Sasaki, a senior staff writer.)

Up to 40% chance of M9 quake off Hokkaido within 30 years: researchers

There is between a 7 and 40 percent chance of a magnitude-9 earthquake striking along the Kuril Trench off Hokkaido within the next 30 years, according to a long-term assessment released by the government's Earthquake Research Committee on Dec. 19.

The assessment marks the first time the committee has released the probability of a mega-quake comparable to the March 2011 Great East Japan Earthquake.

The panel did not rule out simultaneous mega-quakes along the Kuril Trench and the Japan Trench off Honshu's northeastern Tohoku region, which could spell disaster for not only various areas in Hokkaido along the Pacific Coast but also Japan's main island.

"The probability is extremely high. There is a good chance that a quake of the similar magnitude to that of the Great East Japan Earthquake is imminent. It is necessary to take thorough precautions," said Naoshi Hirata, chairman of the committee.

In the early 17th century, a magnitude-8.8 quake is believed to have struck the Pacific coastline of eastern Hokkaido, with the epicentral areas off both Tokachi and Nemuro moving in conjunction. A tsunami over 18 meters high and reaching as far as 4 kilometers inland is thought to have hit the area, causing considerable damage. Although damage to the Tohoku region from the temblor has not been confirmed, the area may once again suffer massive tsunami.

The committee's survey of tsunami deposits on land has shown that up to 18 separate mega-quakes in the same range as the 2011 disaster hit Hokkaido's east coast over the past 6,500 years, with an average interval of 340 to 380 years. The most recent such earthquake occurred some 400 years ago, raising the possibility of an imminent temblor of similar magnitude.

The panel assessed a potential mega-quake in three regions based on different epicenter locations: one each off Hokkaido's Tokachi and Nemuro; and one off Shikotan and Etorofu islands -- two of the four Northern Territories isles held by Russia and claimed by Japan.

The panel has previously released similar long-term assessments for maximum possible quake magnitudes along the Nankai Trough off central and western Japan, and the Sagami Trough off central Japan. According to these reports, the likelihood of a magnitude-8 through 9 quake in the Nankai Trough is somewhere around 70 percent, while that of a magnitude-8 temblor jolting the Sagami Trough is approximately 0-5 percent.

In another long-term assessment for active faults in the Shikoku region in western Japan released the same day, the committee put the probability of a magnitude-6.8 or larger quake striking directly beneath the Median Tectonic Line active fault zone and the Nagao fault zone in Shikoku within the next 30 years at 9 to 15 percent. As the epicenters of many past quakes that hit directly beneath certain areas were shallow, these temblors would likely cause tremendous damage.