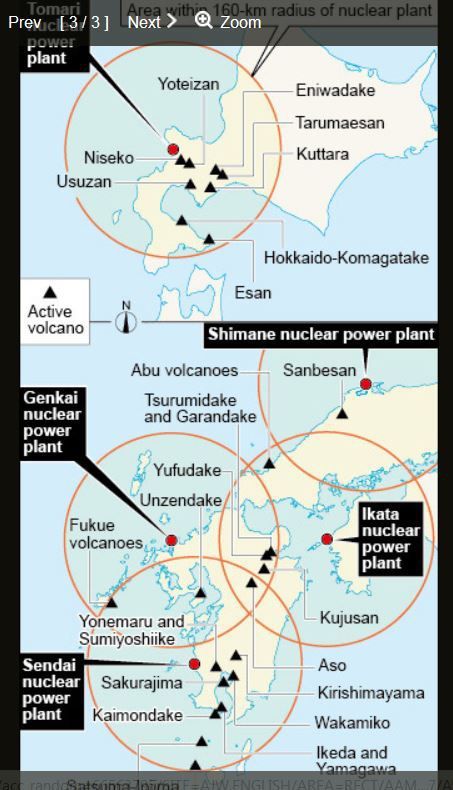 It zeroed in on an aspect that has long been an issue with the anti-nuclear lobby, the Ehime Prefecture plant's proximity to an active volcano and the prospect of the facility being inundated in a pyroclastic flow if Kyushu's Mount Aso, 130 or so kilometers away, blows its top.

Instead of considering the frequency of major eruptions in the area, the Dec. 13 ruling focused on a massive one 90,000 years ago and the possibility of a nuclear calamity occurring if a similar event occurred today.

The ruling, the first by a high court ordering a suspension of nuclear plant operations, is especially relevant because Japan has 111 active volcanoes that have erupted in the past 10,000 years.

While massive eruptions are rare, occurring in general once every 10,000 years, all it takes is one to trigger destruction on an unimaginable scale.

Aso has had four massive eruptions in the last 300,000 years, the most recent occurring 90,000 years ago that triggered a pyroclastic flow that tossed magma and volcanic rocks over the Kanmon Straits separating Kyushu and Honshu into Yamaguchi Prefecture.

The government, which was caught off-guard by the Hiroshima ruling, no doubt will pay close attention to future court rulings at that level because other nuclear power plants are situated at distances similar to that between the Ikata plant and Aso.

Kyushu Electric said it maintains close monitoring of seismic movements in the area caused by the rumblings of five volcanoes and is confident it will detect any signs of a possible huge eruption.

However, experts scoff at the notion on grounds that it is almost impossible to accurately predict the timing and scale of such an event. They also note that Japan has no practical experience in dealing with a massive eruption.

That said, the Japan Meteorological Agency monitors 50 active volcanoes around the clock.

Yoshiyuki Tatsumi, a professor of planetology at Kobe University, said, "Under the current setup of observing (volcanic) quakes and crustal movement, it is impossible to predict the scale of any eruption."

The groundbreaking Hiroshima court ruling took the government by surprise.

Hiroshige Seko, the economy minister and a champion of nuclear power generation, asserts that the safety standards implemented by the Nuclear Regulation Agency in the aftermath of the 2011 nuclear disaster are "the highest in the world."

Five reactors that passed the NRA's more stringent screening have resumed operations since the Fukushima accident.

But the Hiroshima High Court said the NRA's decision to allow the Ikata plant to resume operations was "not rational" in light of the facility's location and the danger of a catastrophe occurring if Mount Aso erupts like it did 90,000 years ago.

Although Chief Cabinet Secretary Yoshihide Suga made clear at a Dec. 13 news conference that the government would closely abide by future decisions by the NRA, he was painfully rattled by the thought that the court ruling could sow further doubts among the public about the safety of nuclear plants, especially those located near volcanoes.

The government has set a goal of raising the ratio of electricity generated by nuclear power to between 20 and 22 percent of the nation's overall needs by fiscal 2030. That would mean resuming operations at about 30 nuclear power plants.

However, utilities are already facing mind-boggling expenses just to meet the tougher safety standards. If they now have to brace for the possibility of being ordered by courts to halt their nuclear plant operations, the burden on private companies could become too much.

"Nuclear power generation is now impossible for a private-sector company because the risks are just too great," said an executive of an electric power company.

(This article was compiled from reports by Shigeko Segawa, a senior staff writer, Chikako Kawahara and Tsuneo Sasai.)