"Does Abe understand the significance of ICAN winning the Nobel Peace Prize?" 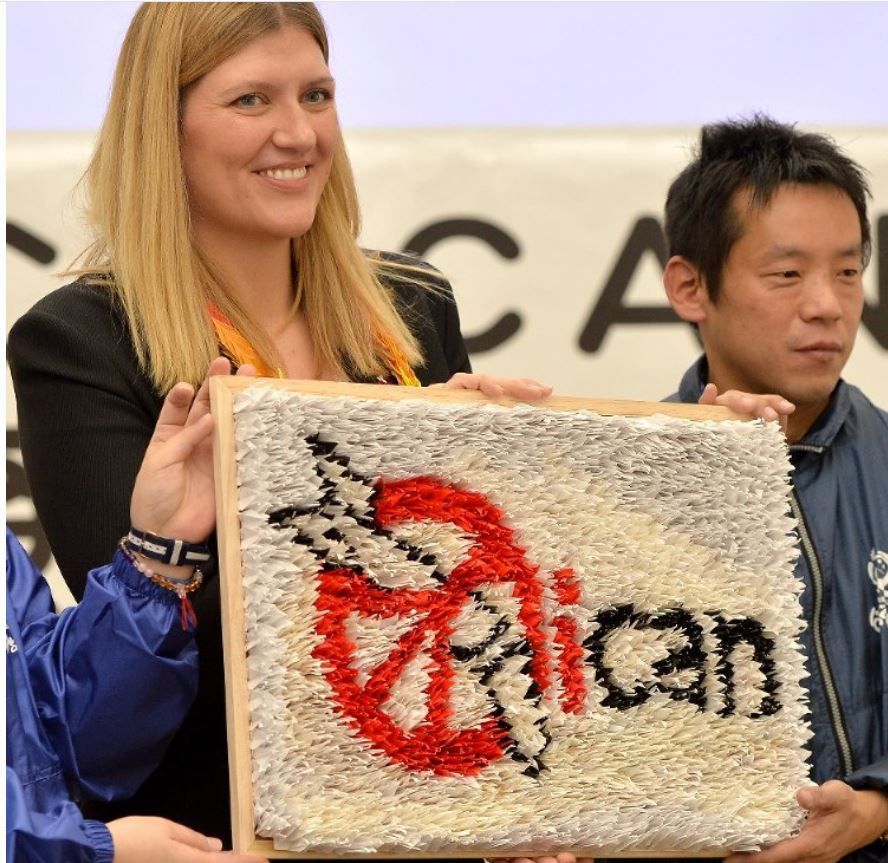 The head of the International Campaign to Abolish Nuclear Weapons, or ICAN, has met with anti-nuclear activists in Hiroshima.

ICAN Executive Director Beatrice Fihn attended a meeting of about 150 people from the atomic-bombed city on Monday.

The event began with a speech by Haruko Moritaki, who co-heads a Hiroshima non-governmental organization.

She said she is counting on the youthful power of ICAN to spread around the world the voices of Hiroshima and the consequences of atomic bombing.

She said non-governmental groups in Hiroshima need to work together to urge Japan's government to join the UN nuclear ban treaty.

Fihn told the audience there is a "large gap" between what people in Hiroshima and Nagasaki believe, and Japanese government policy.

She said the threat of nuclear weapons would continue as long as Tokyo believes in nuclear deterrence.

She added citizens should unite to demand change.

A high school student also delivered a speech, stressing the need to create occasions to make the younger generations think about the nuclear ban treaty.

Moritaki said she wants young Japanese people to take hope and inspiration from ICAN and actively engage in its campaign.

Fihn's organization won last year's Nobel Peace Prize for its contribution to the adoption of the nuclear ban treaty at the United Nations.

Beatrice Fihn, executive director of the International Campaign to Abolish Nuclear Weapons (ICAN), the international nongovernmental organization that won last year's Nobel Peace Prize, was denied a meeting with Prime Minister Shinzo Abe during her current visit to Japan in spite of her request for one, on the grounds of scheduling difficulties.

ICAN was instrumental in the adoption of the United Nations Treaty on the Prohibition of Nuclear Weapons. Japan has not signed this treaty, but even so, calls have arisen from within Japan, the only country to have been attacked with nuclear weapons in warfare, for the prime minister to meet and talk with the ICAN leader.

Prime Minister Abe is scheduled to return from a trip to Eastern Europe on Jan. 17. Fihn arrived in Japan on Jan. 12, is staying in Tokyo on Jan. 16 and 17, and will leave Japan on Jan. 18. Speaking to reporters after a tour of the Hiroshima Peace Memorial Museum in Hiroshima on Jan. 15, she expressed disappointment that she had been denied a chance to meet Prime Minister Abe even though she had been able to meet the leaders of other countries. She noted that Japan, in particular, had been subjected to A-bomb attacks in the past, and said she was keen to talk with the prime minister and figures in the Japanese government. Fihn added she looks forward to a meeting at the next opportunity.

The same day, Chief Cabinet Secretary Yoshihide Suga said in a news conference that denial of the meeting came down to "the fact that it was difficult in terms of schedules, nothing more, nothing less."

ICAN had sent the Cabinet Office two written requests since December last year asking for a meeting between Fihn and the prime minister during her stay in Tokyo. Abe has met Nobel laureates from abroad in the past, including economists Paul Krugman in 2014, Robert Merton in 2015, and Joseph Stiglitz in 2016.

The U.N. Treaty on the Prohibition of Nuclear Weapons bans the use, development, testing, production, stationing and stockpiling of nuclear weapons, as well as the threat of their use -- the basis of nuclear deterrence. The accord was adopted in the United Nations in July last year with the majority approval of 122 countries. However, Japan, which is under the protection of the U.S. "nuclear umbrella," did not take part in treaty negotiations.

Fumiko Nishizaki, a professor at the University of Tokyo versed in diplomatic history, commented, "The Japanese government has stressed that its final goal is the elimination of nuclear weapons, and it would be normal to respond to a Nobel laureate with respect.

Adopting the stance of listening to an organization with conflicting views would have raised the profile of the administration, so this is a regrettable decision."

Meanwhile, Tomoyuki Mimaki, 75, representative director of the Japan Confederation of A- and H-bomb Sufferers Organizations (Nihon Hidankyo), voiced distrust toward the government. "I'm disappointed in the prime minister," he said. "Does the government really think that being under the 'nuclear umbrella' is the best thing?"

Koichi Kawano, 78, chairman of the Japan Congress Against A- and H-Bombs, commented, "I guess that the prime minister can't confidently give a reason for not participating in the treaty. As an A-bombed country, Japan should be offering a congratulatory message for (ICAN's winning of) the Nobel Peace Prize, but instead it's fleeing without any message."

Masao Tomonaga, 74, honorary director of The Japanese Red Cross Nagasaki Genbaku Hospital, commented, "If scheduling is the issue, then it can't be helped, but the important thing is whether the government accepts Ms. Fihn's message or not."

Both Kawano and Tomonaga are survivors of the Nagasaki atomic bombing.

ICAN asked the Japanese government twice since late December to arrange a meeting between Abe and Executive Director Beatrice Fihn during her ongoing visit to Japan, but the Foreign Ministry declined the request, citing a scheduling conflict, according to Peace Boat, a major steering group member of the Geneva-based organization.

Expressing disappointment that she would be unable to meet Abe during her first visit to Japan, Fihn said in Hiroshima she wants to talk with him about how the world can avoid a repeat of the devastation inflicted on Hiroshima and Nagasaki -- the two cities atom-bombed by the United States in 1945.

Fihn added she looks forward to meeting with the Japanese prime minister at the next opportunity.

Atomic-bomb survivors, known as hibakusha in Japan, expressed their disappointment.

"Does Prime Minister Abe understand the significance of ICAN winning the Nobel Peace Prize? It is very regrettable to feel this difference of attitudes between the government and atomic-bomb survivors," said Hiroko Kishida, a 77-year-old hibakusha.

Chief Cabinet Secretary Yoshihide Suga, however, told media in Tokyo that a meeting was not arranged "due to a conflict of schedule. Nothing more, nothing less."

Abe departed Japan on Friday for a six-nation European tour and is set to return home on Wednesday. Fihn arrived in Japan on the same day as Abe's departure.

After visiting Nagasaki through Sunday, she delivered a keynote speech at an event held Monday in Hiroshima where some 340 people, including students and survivors of the atomic bombing, gathered.

She said there are divergent views on the U.N. nuke ban treaty between the people who live at the sites of the atomic bombs and the Japanese government and the gap in understanding must be narrowed, stressing all countries' participation in the treaty will be key to resolving the nuclear weapons issue.

In Hiroshima, Fihn laid flowers at the Peace Memorial Park's Cenotaph and listened to the testimony of 80-year-old hibakusha Keiko Ogura.

Fihn is scheduled to hold discussions with Japanese parliamentarians in Tokyo on Tuesday before leaving Japan on Thursday.

ICAN, founded in 2007, is a coalition of NGOs that involves about 470 groups from more than 100 countries.