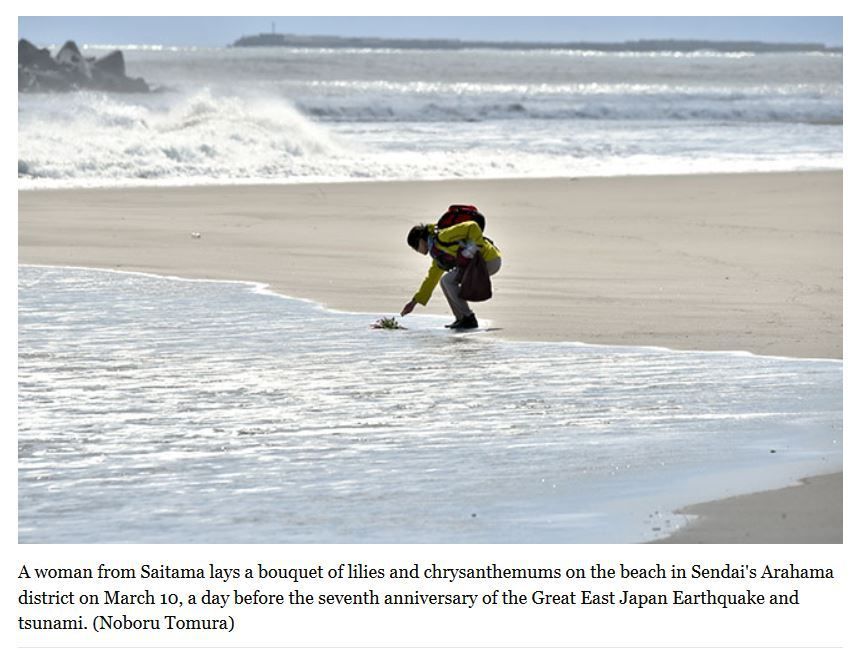 SEVEN YEARS AFTER: Over 70,000 still living elsewhere from 2011 quake and tsunami

Some 73,000 people remain displaced on March 11 on the seventh anniversary of the Great East Japan Earthquake, tsunami and nuclear disaster that struck the nation’s northeastern region, according to the Reconstruction Agency.

Although roads, railways and homes have been rebuilt in the stricken Tohoku region, the outflow of population continues from devastated areas, particularly from coastal communities.

The prefectures are also suffering from a drop in overnight tourist numbers, which have not returned to pre-disaster levels.

In Fukushima Prefecture, the evacuation order for four municipalities that were exposed to high levels of radiation from the Fukushima No. 1 nuclear power plant accident was lifted about a year ago.

But not many residents are returning to live in their hometowns.

Agricultural production also has not rebounded to levels prior to the nuclear disaster.

Compensation paid by Tokyo Electric Power Co., operator of the crippled Fukushima plant, to evacuees for their mental distress will end in March. TEPCO cited as the reason the lifting of the evacuation order for the municipalities.

On March 11, 2011, the magnitude-9.0 quake and towering tsunami left more than 22,000 people dead or missing, according to Reconstruction Agency and National Police Agency data.

The figure includes people who later died while evacuating.

Learning from the lessons of 3/11, seven years on

It’s been seven years since the Great East Japan Earthquake and tsunami, which took more than 18,000 lives. While efforts continue to rebuild the lives of survivors shattered by the disasters, we must not let the memory of those tragic events fade away. Instead we must continue to learn from the lessons of 3/11 to better understand how to prepare for, defend against, and recover from future disasters in this quake-prone country.

The events that took place on March 11, 2011 — a mega 9.0 magnitude quake originating 130 km off Miyagi Prefecture that caused a giant tsunami which ravaged coastal communities along a wide stretch of northeastern Honshu — serve as a reminder that a disaster of unprecedented scale can happen at anytime. Since then, the nation has experienced all sorts of natural disasters big and small — and will undoubtedly face more in the future.

Were we prepared enough to defend ourselves against the tsunami on that day? Are we better prepared seven years on? These are the kinds of questions we need to ask as we look back on the events of 3/11.

It was a 15-meter-high tsunami — which Tokyo Electric Power Co. termed “beyond any assumption” — that flooded Tepco’s Fukushima No. 1 nuclear power plant, causing it to lose the emergency power needed to keep the reactors cool and resulting in core meltdowns in three of the six reactors. Efforts to clean up the mess and decommission the plant continue to inch forward — a process that is expected to take decades to complete. Meanwhile, evacuation advisories to municipalities in areas around the crippled plant — formerly designated as no-go zones due to the radioactive fallout from the Tepco plant disaster — have gradually been lifted following decontamination efforts. The reconstruction of community lives, however, remains slow.

How and why the Fukushima nuclear disaster took place — and whether the steps taken in the aftermath to deal with the damage have been adequate — must be constantly questioned and reviewed to prevent a recurrence.

Seven years on, reconstruction of the tsunami-ravaged areas has made progress, but efforts to rebuild the shattered lives of many survivors are only halfway through.

Public infrastructure has been steadily restored. Of the railway lines destroyed or suspended in the disasters, only a 20.8 km section between Tomioka and Namie stations of the JR Joban Line and a 55.4 km section between Miyako and Kamaishi stations on the Yamada Line remain out of service, and are scheduled to be reopened in fiscal 2018 and 2019, respectively. The construction of public housing and apartments to accommodate people who lost their homes has been 80 percent completed in Iwate Prefecture and 90 percent in Miyagi and Fukushima. The development of land for those who wish to rebuild their houses in the tsunami-ravaged areas is also more than 80 percent finished.

At the same time, some 7,000 families continue to live in prefabricated housing units — supposedly temporary shelters — in the three prefectures that suffered the heaviest damage. Most of the local municipalities anticipate that the units will be vacated by the end of fiscal 2020, but this isn’t the case for some temporary units in Fukushima that accommodate people forced to evacuate their homes in the wake of the Tepco plant meltdowns.

Roughly 73,000 people remain displaced from their homes after they evacuated from the tsunami and the nuclear disasters, living in the temporary housing units, rented apartments or relatives’ and friends’ homes across the country. As life away from home became protracted, many have chosen to resettle in the places where they evacuated. Of the 42 municipalities in Iwate, Miyagi and Fukushima, more than half — 24 — have suffered a population decline of at least 10 percent compared to before the 2011 disasters.

The decline is acute in the tsunami-ravaged towns, including Onagawa (39 percent) and Minamisanriku (32 percent) in Miyagi Prefecture. In Fukushima, seven municipalities have sustained population drops of more than 70 percent, including the towns of Futaba and Okuma —the site of the Tepco plant — where all residents remain evacuated.

The evacuation advisories have been lifted in most of the former no-go zones around the Tepco plant — except for areas where habitation is deemed difficult over the long term due to high radiation levels. But the return of the former residents remains slow. Of the 49,000 people registered as residents in the areas where evacuation advisories were lifted in recent years, it’s estimated that only about 15 percent actually live there.

The areas devastated by the 3/11 disasters have come a long way. But they still have a long way to go.