Helping to understand the situation at Fukushima Daiichi? 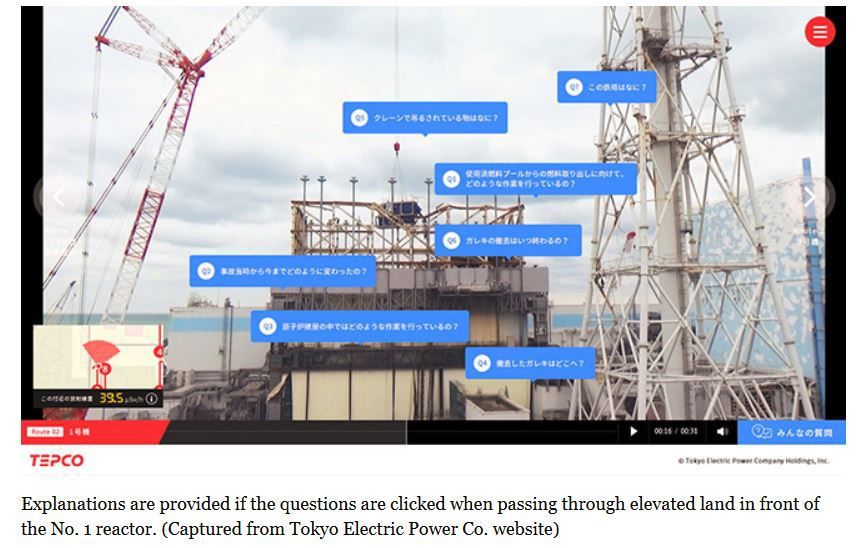 TEPCO offers virtual tour of Fukushima No. 1 plant on website

FUKUSHIMA--The crippled Fukushima No. 1 nuclear power plant is open for all to explore in a virtual tour on operator Tokyo Electric Power Co.’s website.

TEPCO released the “Inside Fukushima Daiichi” feature, only available on personal computers, so visitors can feel as if they are touring the decommissioning venue by car.

The service is aimed at helping more people understand the current state of the plant, also known as Fukushima Daiichi, after the nuclear crisis triggered by the 2011 Great East Japan Earthquake and tsunami.

While visitors can tour the plant grounds on the website, the radiation level around the displayed area is shown in the lower left portion of the monitor.

Front and side views of the No. 1 to No. 4 reactors, which suffered serious damage, can be seen up close.

In some sections, images taken both recently and immediately after the disaster are shown to offer comparisons. Explanations of the plant are provided in Q&A format for some areas as well.

A 360-degree view of the inside of the No. 5 reactor building, which has almost the same structure as the No. 1 to No. 4 reactors, and other facilities is also offered.

TEPCO is looking to provide an English-language version in the future.

The virtual tour is available at (http://www.tepco.co.jp/insidefukushimadaiichi/index-j.html).

Removing the 566 fuel assemblies from No.3 reactor
Roads should not be built with contaminated material
"A madman's gun held permanently to our temple"
Commenter cet article
Newsletter
Recherche
Le blog de fukushima-is-still-news