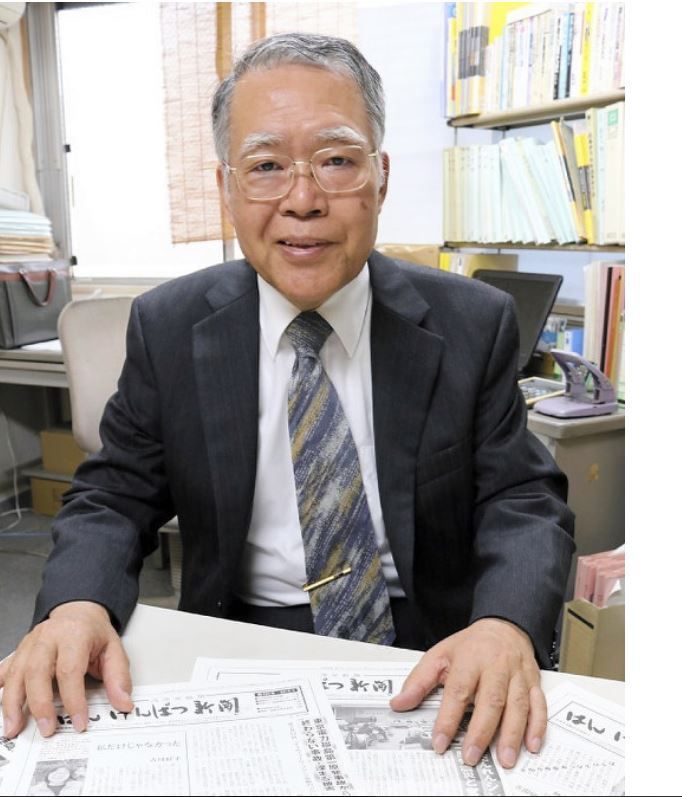 Baku Nishio, editor-in-chief of the Han Genpatsu Newspaper, shows off some back issues of the paper in Tokyo's Shinjuku Ward on May 2, 2018 (Mainichi)

TOKYO -- The editor of the "Han Genpatsu Shimbun" ("Anti-Nuclear Power Plant Newspaper"), which marked its 40th anniversary in May, recalls that the paper promoted exchanges between those involved in the anti-nuclear power movement in a bid to warn society.

"The paper has provided a venue for those opposed to atomic power to exchange information and acquire knowledge," said Baku Nishio, now 71, the editor-in-chief of the four-page monthly paper.

The newspaper was inaugurated in May 1978, four years after the national government established a system to provide subsidies to local bodies that host atomic power stations.

"The central government began to play a leading role in the promotion of nuclear power. Residents of various regions who were involved in separate anti-nuclear power campaigns called for solidarity with each other," Nishio said of the motives behind the launch of the paper.

Nishio had previously worked for an advertisement production company. However, he said, "I saw and heard advertising giants provide information on the human networks of those involved in anti-nuclear power campaigns to power companies, and I had serious doubts about the situation."

During a rally, he got acquainted with Jinzaburo Takagi, a now deceased scientist who supported the anti-nuclear power movement, and then became involved in the editorial work of the paper.

Nishio asked residents of various areas, who were calling for the abolition of nuclear plants through rallies and lawsuits as well as mayoral and gubernatorial elections, to contribute articles about the processes of their activities and their feelings to the paper.

Articles in which Takagi, Nishio and others raised questions about atomic power based on objective data were also published in the paper every month. Many graphic charts were used to show analyses of the nuclear power situations in various parts of the world.

Yasue Ashihara, 65, who has been involved in a campaign against Shimane Nuclear Power Plant, said she has constantly used the newspaper as a reference material.

"We've learned how residents in areas where active faults are situated near nuclear plants, just like in Shimane, were appealing to local bodies and power companies while gaining other information from the paper," Ashihara said.

The circulation of the paper had been hovering around 2,000 copies but doubled following the 1986 Chernobyl nuclear disaster.

Following an earthquake off southwestern Hokkaido in 1993 and the Great Hanshin Earthquake in 1995, the paper published articles in which geologists warned that a massive tsunami could hit a nuclear power station in Japan.

An issue published shortly before the March 2011 Great East Japan Earthquake states that the Fukushima (No. 1) nuclear plant, which had been in operation for nearly 40 years, has unprecedented levels of risk. The paper then announced that an event will be held to consider the future of the power station with an eye to decommissioning the plant.

Nishio and others involved in the paper are filled with a sense of regret over their failure to prevent the triple meltdown at the power plant that left large areas around the facility contaminated by radiation.

The annual subscription fee is 3,000 yen. The editor has no intention of changing the frequency of publishing the paper or the number of pages.

"We can now gather a massive volume of information on the internet. But the contents are a mixture of fact and fiction. We'd like to carefully choose important information and convey it to our readers without worrying too much about the speed of providing information or the amount," Nishio said.