What's to be done about tritium? 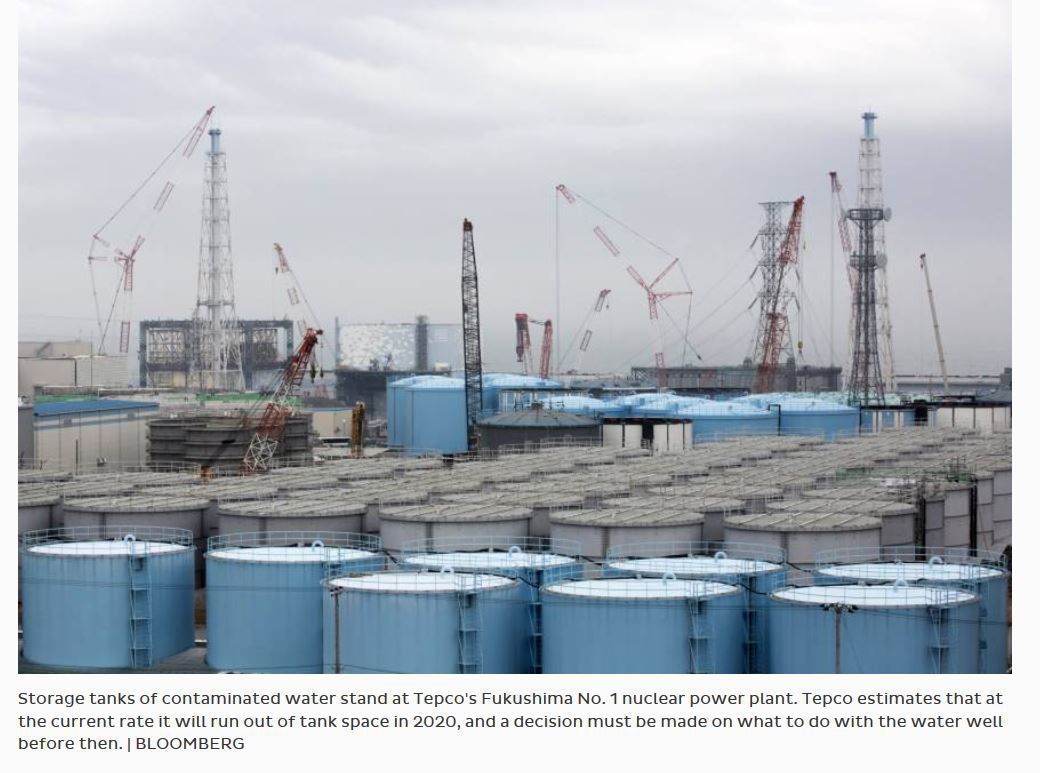 About that tritiated water: Who will decide and when?

Virtually every news story about the Fukushima No. 1 nuclear power plant acknowledges the tremendous ongoing problem of contaminated water that is accumulating in approximately 850 large tanks on-site. There are about 850,000 tons of water in the tanks at present, from which all radionuclides of concern except tritium — radioactive hydrogen — have been effectively removed. More water accumulates each day, in quantities roughly equal to the amount of groundwater that seeps into the damaged reactor buildings. Tokyo Electric Power Company Holdings estimates that at the current rate it will run out of tank space in 2020. Something needs to be done well before then, and the decision should address the concerns of all stakeholders, public and private.

The Ministry of Economy, Trade and Industry recently announced that meetings will be held where the public can hear explanations of proposed solutions and comment on them. Unless they think seriously about how to prevent this from becoming yet another clumsy exercise in DAD — “decide, announce, defend” — these meetings will be a mere fig leaf that will allow the government to claim it has adequately consulted the public.

As it is, the government’s decision-making process itself appears to be dysfunctional, and we have reason to be skeptical that it will be possible to avert very bad domestic and international public reactions if and when this water is disposed of.

The Subcommittee on Handling Water Treated by the Polynuclide Removal Facility is one of several Japanese government committees organized by METI tasked with formulating a response to the problem of the radioactive water. The planned public sessions were announced at its eighth meeting, on May 18.

This is a step in the right direction, and is long overdue. Nevertheless it may well be a case of “too little, too late.” The decision, delayed for years, will almost certainly be to dilute the water and release it to the ocean, and meanwhile, public opposition to this idea has hardened. The issue hinges on both scientific understanding and public perception.

Tritium, scientifically indicated as “H3,” occurs both naturally and through man-made processes. Tritiated water (HTO), like that accumulating at the No. 1 nuclear power plant, behaves almost identically to normal water, and can be taken up easily by living organisms.

The scientific consensus is that the health risks from exposure to tritium are several orders of magnitude lower than those from radionuclides like cesium, radioactive iodine or strontium. This is reflected in allowable limits in drinking water, which are generally tens or hundreds of times higher for tritium than for these others, ranging from 100 Bq/L in the European Union to 76,103 Bq/L in Australia. Nevertheless, the scientific community acknowledges some uncertainty about these risks.

Leaving the tritiated water in the tanks at No. 1 is the riskiest thing to do, due to the possibility of ruptures or uncontrolled leaks. As far back as 2014, the International Atomic Energy Agency recommended a controlled release to the ocean as the safest course of action, and Japan’s Nuclear Regulation Agency concurred.

A Tritiated Water Task Force convened by METI in 2013 examined five options in detail, and in 2016 concluded that for reasons of cost, available technology, time required, and safety, diluting and discharging it to the ocean was the least objectionable approach. The task force presented relevant monitoring data from decades of similar releases of tritium to the ocean from nuclear facilities in Japan and abroad, noting that the quantities from the No. 1 plant would be many times smaller and the tritium levels in ocean life too low to be of real concern.

Tepco has made it clear that ocean release is its preference as well. The company says that it strives to meet government recommendations, and does not intend to act without government support, but is ultimately responsible for any actual decision.

In July 2017 Takashi Kawamura, chairman of Tepco, said publicly that the decision to release the tritiated water had already been made, and the public outcry was immediate, particularly from Fukushima fishermen who expected to be consulted. The company quickly backpedaled.

Constructing the dilution facilities and pipelines that an ocean release would require is expected to require almost a year after any decision is made. At the current rate, that means the “go” signal must be given by early 2019 at the latest. That no decision has been officially announced to date can be ascribed to the very reasonable expectation of a strong public backlash, and, I believe, the reluctance of any responsible government officials to be associated with such an unpopular decision.

The strongest and most meaningful opposition comes from Fukushima’s fisheries cooperatives, which have suffered tremendously due to the 2011 disaster. Representatives of Tepco, METI and other government bodies that share the mandate for dealing with the contaminated water invariably stress how important it is to them to reach understanding and agreement with all stakeholders, the fisheries cooperatives in particular.

Takahiro Kimoto, a general manager in Tepco’s nuclear power division, explained, “The policies can’t and shouldn’t be determined by Tepco alone, but we continue discussing the available options with government and other stakeholders. These discussions are taking a long time, but we consider them essential.” Put bluntly, Tepco knows they will be pilloried no matter what, and seeks broad support.

Shuji Okuda, METI’s director for decommissioning and contaminated water management, stressed that no decision has yet been made regarding which of the five options for dealing with the tritiated water will be chosen. “It will be a decision of the Japanese government as a whole,” Okuda explains, “not one made by any single agency. And it will be based on ample discussions with all stakeholders.”

Although Tepco and METI indicate that they are prepared to accommodate the fishermen’s conditions regarding the release, the cooperatives are adamant. “We are totally opposed to the planned release,” explained Takaaki Sawada of the Iwaki Office of the Fukushima Prefectural Federation of Fisheries Cooperative Associations, known as FS Gyoren. “It’s not a question of money or compensation,” he continued, “nor of any level of concentration we might accept as safe. We do not think it should be our responsibility to decide whether or not to release it. We think it will be impossible for the public in general to understand why tritium is considered low risk,” he continued, “and expect there will be a large new backlash against Fukushima marine products no matter how scientifically it is explained.”

Much hinges on public understanding of the risks, and therefore on transparency. Robust and effective two-way communication is essential, not to persuade the public that official plans are acceptable, but to better equip them to participate in the debate in an informed way, and to push back where they feel it is necessary. It is the public’s right to demand this kind of inclusion.

Communication should be aimed not only at fishermen and Japanese consumers, but internationally to all who are concerned about what the effect on the Pacific will be. The government has been sitting on the Task Force recommendations for almost two years without taking action. That it has taken this long to even begin planning to engage the public on this issue is, again, because no one in a governmental decision-making position wants to be politically associated with the consequences of a tritium release.

According to METI, the content, location and timing of the public sessions will be discussed at the next subcommitee meeting in July. People unable to attend in person will be able to submit comments and questions via email. Though hastily planned events could possibly be held before the end of this year, it seems likely they will need to happen in 2019, bumping up against the decision deadline.

While some fishermen are likely to attend, the cooperatives themselves will likely refuse. This situation requires the actual involvement of citizens in the decision making process, but it is difficult to find instances of that actually happening in Fukushima since the accident in 2011. At the central government level in particular, it has almost always been DAD.

Regardless of whether one trusts scientific opinion or Tepco, the tritiated water cannot be left in the tanks at No. 1 indefinitely, and releasing it to the ocean, though not without risk, is the least objectionable of the available options. As it stands now, given the depth of public mistrust and the nature of misinformation in our current era, the situation is ripe for the maximum misunderstanding and negative social impact to occur if and when this tritiated water is finally released.

Unfortunately, I think we should be prepared for things to be done the “Kasumigaseki way”: for the decision to be avoided until the last possible moment, and for government officials to claim then that an unavoidable emergency had arisen and it couldn’t be helped.

There will be negative social impact no matter what, but unless responsible government officials step up soon, own the decision and ensure that public engagement is genuine, broad, and effective, these negative impacts will be unnecessarily magnified.

Azby Brown is the lead researcher for Safecast, a volunteer-based NPO that conducts open, independent, citizen-run monitoring of radiation and other environmental hazards worldwide. www.safecast.org