A mega quake for Japan

What Is the Probability of a Mega-quake Striking Japan in the Future?

Earlier this month, an earthquake of magnitude 6.1 struck northern Osaka, killing 5 people and injuring more than 300.

A government panel has released its latest earthquake probability map, which indicates the likelihood of each area being hit in the coming 3 decades by tremors of 6-minus or above on the Japanese intensity scale of zero to 7 -- about the same level as the one that hit Osaka. A member of the panel says an earthquake of 6-minus could strike anywhere in Japan, and urges people to be prepared.

High probability in the Kanto region and along the Pacific coast

The earthquake probability map shows high-risk areas in red. The darker the color, the greater the likelihood of a big quake. Yellow indicates a relatively lower probability.

A 3 percent probability roughly means that a quake of 6-minus or higher will occur once in 1000 years, while 6 percent means once in 500 years, and 26 percent points to once in a century. 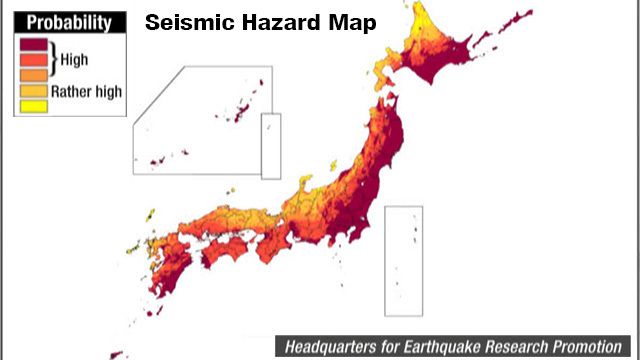 By region, the areas facing the Pacific Ocean from Shikoku to Kanto and the Pacific coast of Hokkaido are marked in dark red, indicating probabilities of 26 percent or higher.

In the Kanto region, the probability of a major quake is highest in Chiba City, at 85 percent. The figure is 82 percent for Yokohama and 81 percent for Mito. Tokyo's Shinjuku Ward is located in an area with 48 percent probability.

In the Tokai region, the probability for Shizuoka is 70 percent and Nagoya is 46 percent. In Hokkaido, the risk for Nemuro City is 78 percent, Kushiro is 69 percent, and Obihiro, 22 percent. Beware of massive earthquakes that occur in ocean trenches

The panel explains that these areas have high probabilities because massive earthquakes centering in the Chishima Trench, Japan Trench and the Nankai Trough have been occurring at intervals of a few decades to a century.

These earthquakes occur around ocean trenches where the oceanic plate is forced underneath the continental plate.

Huge earthquakes have been occurring especially around the Nankai Trough roughly every 100 years. As the last one took place more than 70 years ago, there is a growing probability the next one will happen soon around the Pacific coast of western Japan.

The map shows the probability of a major quake hitting Osaka City is 56 percent. The June 18th quake in Osaka is believed to have been caused by active faults. Aitaro Kato, an associate professor at the University of Tokyo's Earthquake Research Institute, has found that aftershocks have concentrated on the northern and the southwestern sides of the epicenter. This led him to conclude that the quake was caused by 2 faults in the area moving almost concurrently.

Active faults exist across Japan. They are believed to total about 2,000, including 114 major ones around the archipelagos. Some areas have yet to be studied thoroughly, and there may be more that have not yet been identified. 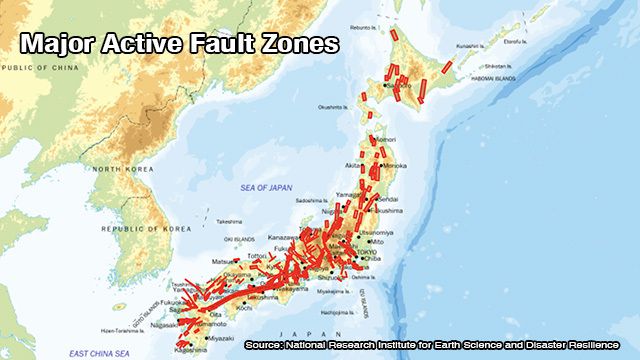 Mega-quake could hit anywhere around the country

Panel chair Naoshi Hirata says there's no place in Japan that has zero probability of 6-minus or stronger tremors, so everyone should be prepared for powerful quakes.

Details of the latest map are available on the website of the National Research Institute for Earth Science and Disaster Resilience.

Three Fault Zones May Have Been Involved in Osaka Quake