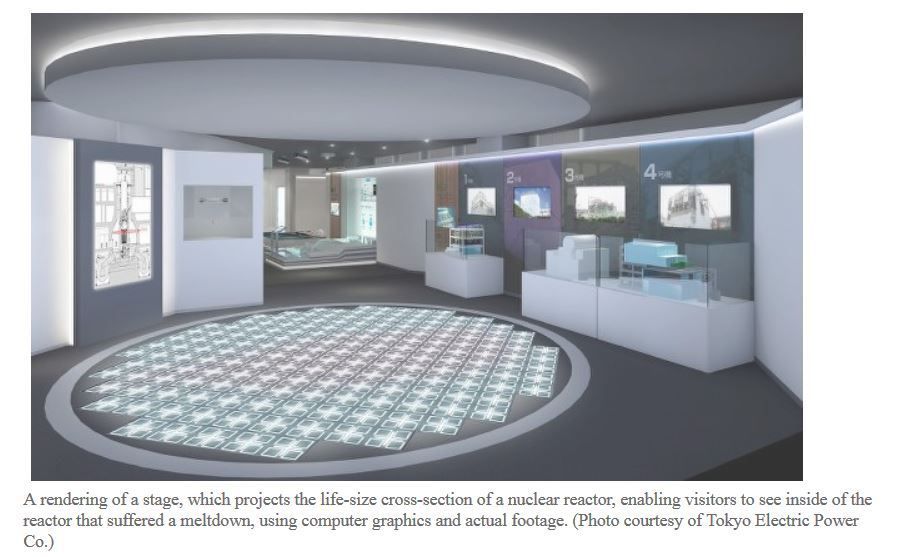 TOMIOKA, Fukushima -- Tokyo Electric Power Co. (TEPCO) announced on July 27 that it will open a museum here to display exhibitions in relation to the Fukushima No. 1 Nuclear Power Plant disaster and its decommissioning work.

The exhibition, which is scheduled to start in November 2018, will mostly display films in which actors re-enact scenes in the form of dramas, to inform visitors of how the Fukushima nuclear disaster that began on March 11, 2011, was handled and follow-up work, in sections titled, "Memories and records" and "Reflections and lessons." On a different floor, drama footage introducing measures taken to lower the risk of decommissioning work and descriptions of the enormous worksite will be screened in sections titled, "Conditions at the scene" and "Progress of the work."

There will also be a stage in which a life-size cross-section of a nuclear reactor is projected, using both computer graphics and actual footage. Visitors can also experience a simulation of the situation at the time of the meltdowns and see images of the actual debris.

Makoto Okura, head of TEPCO's Fukushima Revitalization Headquarters, stated at a press conference, "I want the museum to serve as a venue for people hesitant to come back to local areas to understand what kind of accident it was, and what it's like in reality."

The venue for the museum will be a refurbished former Energy Kan building in the Fukushima Prefecture town of Tomioka, which was shut down after the disaster. The exhibition space is approximately 1,900 square meters spread over two stories. Entry to the museum will be free.