One man is advocating for their protection

A UN Special Rapporteur who last August joined two colleagues in sounding an urgent alarm about the plight of Fukushima workers, has now roundly criticized the Japanese government for returning citizens to the Fukushima region under exposure levels 20 times higher than considered “acceptable” under international standards.

He urged the Japanese government to “halt the ongoing relocation of evacuees who are children and women of reproductive age to areas of Fukushima where radiation levels remain higher than what was considered safe or healthy before the nuclear disaster seven years ago.”

Baskut Tuncak, (pictured at top) UN Special Rapporteur on hazardous substances and wastes, noted during a October 25, 2018 presentation at the UN in New York, as well at a press conference, that the Japan Government was compelling Fukushima evacuees to return to areas where “the level of acceptable exposure to radiation was raised from 1 to 20 mSv/yr, with potentially grave impacts on the rights of young children returning to or born in contaminated areas.” He described exposure to toxic substances in general as “a particularly vicious form of exploitation.”

In August, Tuncak, along with Urmila Bhoola and Dainius Puras, expressed deep concern about the Fukushima “cleanup” workers, who include migrants, asylum seekers and the homeless. They feared “possible exploitation by deception regarding the risks of exposure to radiation, possible coercion into accepting hazardous working conditions because of economic hardships, and the adequacy of training and protective measures.

We are equally concerned about the impact that exposure to radiation may have on their physical and mental health.”

Now, Tuncak is urging Japan to return to the 1 millisievert a year allowable radiation exposure levels in place before the 2011 Fukushima Daiichi disaster. 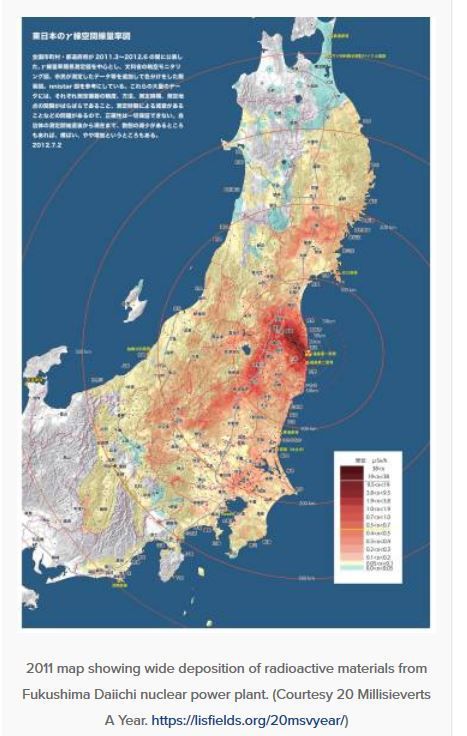 In a revealing response to Tuncak’s presentation at the UN, the delegate from Japan claimed that 20 msv “is in conformity with the recommendation given in 2007 by the International Commission on Radiological Protection.” He also claimed that Tuncak’s press release would cause people in Fukushima to suffer “an inaccurate negative reputation” that was “further aggravating their suffering,” and that the government and people of Japan were “making effort with a view to dissipating this negative reputation and restoring life back to normal.”

This view is deeply characteristic of the Abe government which is desperately attempting to “normalize” radiation among the population to create a public veneer that everything is as it was. This is motivated at least in part by an effort to dissipate fears about radiation exposure levels that will still be present during the 2020 Summer Olympics there, with events held not only in Tokyo but also in the Fukushima prefecture.

However, Tuncak corrected the delegate’s information, responding that:

“In 2007, the ICRP recommended deployment of “the justification principle. And one of the requests I would make for the Japanese government is to rigorously apply that principle in the case of Fukushima in terms of exposure levels, particularly by children, as well as women of reproductive age to ensure that no unnecessary radiation exposure and accompanying health risk is resulting.” Tuncak said Japan should “expeditiously implement that recommendation.”

He also reminded the delegate that “the Universal Periodic Review of the Human Rights Council last year, did issue a recommendation to lower the acceptable level of radiation back down from 20 millisieverts per year to one millisievert per year. And the concerns articulated in the press release today were concerns that the pace at which that recommendation is being implemented is far too slow, and perhaps not at all.”

During the press conference Tuncak noted that Japan is a party to the UN Convention on the Rights of the Child and that forcing evacuees back into areas contaminated to 20 mSv/yr was against the standards contained in that Convention. “We are quite concerned in particular for the health and well-being of children who may be raised or born in Fukushima,” he said. Earlier, Japan had sounded tacit agreement to reducing allowable exposure levels back down from 20 mSv/yr to 1 mSv/yr. But few believed they would carry this out given that it is virtually impossible to clean up severely contaminated areas in the Fukushima region back to those levels.

“It is important to understand that the Fukushima disaster is actually an ongoing disaster. The radioactive particles deposited on the ground in March 2011 are still there, and in Japan, millions of people are living on territories that received significant contamination.”

Of the cleanup process, Chareyron told Truthout: “The ground and most contaminated tree leaves are removed only in the immediate vicinity of the houses, but a comprehensive decontamination is impossible.” He said in the article that the powerful gamma rays emitted by Cesium 137 could travel dozens of meters in the air. Therefore, the contaminated soil and trees located around the houses, which have not been removed, are still irradiating the inhabitants.

While the UN delegate from Japan claimed that no one was being forced to return and the decision rested with the evacuees alone, Tuncak expressed concern about coercion. “The gradual lifting of evacuation orders has created enormous strains on people whose lives have already been affected by the worst nuclear disaster of this century. Many feel they are being forced to return to areas that are unsafe, including those with radiation levels above what the Government previously considered safe.” Recalling his efforts to protect Fukushima workers, Tuncak observed the irony that Japan had admitted that the death of a Fukushima worker from lung cancer was directly related to exposure to radiation at the stricken plant and “quite interestingly, the level of radiation that he was exposed to in the past five years was below the international community’s recommendation for acceptable exposure to radiation by workers.”

Tuncak’s report did not focus solely on Fukushima. It also included exploitation and abuse of Roma people, South Koreans exposed to a toxic commercial product and air pollution in London. During his UN presentation, he observed that “over two million workers die every year from occupational diseases, nearly one million from toxic exposures alone. Approximately 20 workers will have died, prematurely, from such exposures at work by the time I finish my opening remarks to you.”

Before addressing the plight of Fukushima evacuees, he pointed out how “exposure to toxic pollution is now estimated to be the largest source or premature death in the developing world, killing more people than HIV AIDS, tuberculosis, and malaria combined.” While noting that this problem exists to a greater or lesser degree the world over, he added that “pediatricians today describe children as born ‘pre-polluted,’ exposed to a cocktail of unquestionably toxic substances many of which have no safe levels of exposure.”

Japan’s decision to ignore pleas to halt repatriation of evacuees into high radiation exposure levels usually deemed unavoidable (but not safe) for nuclear workers, not ordinary citizens, will now tragically contribute to these numbers.

Mr. Baskut Tuncak is Special Rapporteur on the implications for human rights of the environmentally sound management and disposal of hazardous substances and wastes. As a Special Rapporteur, he is part of what is known as the Special Procedures of the Human Rights Council. Special Procedures, the largest body of independent experts in the UN Human Rights system, is the general name of the Council’s independent fact-finding and monitoring mechanisms that address either specific country situations or thematic issues in all parts of the world.