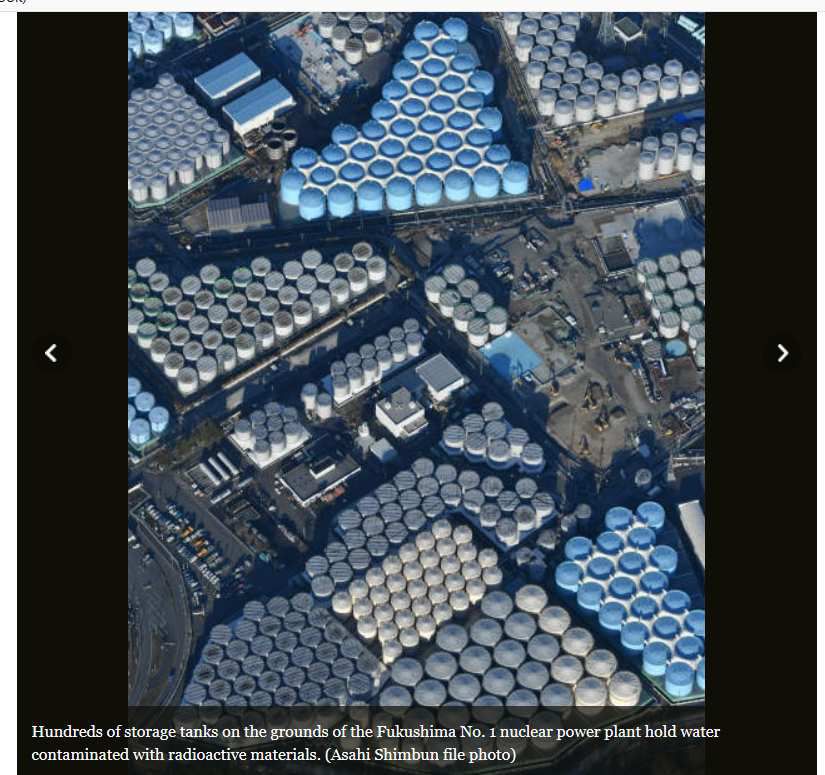 The crippled Fukushima No. 1 nuclear plant reached an undesired milestone on March 18: Storage tanks at the site now contain more than 1 million tons of radiation-contaminated water.

The announcement by the plant’s operator, Tokyo Electric Power Co., came as the utility and the central government continue to weigh water-disposal methods while hearing the concerns of fishermen who fear for their livelihoods.

Toyoshi Fuketa, chairman of the Nuclear Regulation Authority, has repeatedly said a decision must be made soon on how to deal with the contaminated water.

“We are entering a period in which further delays in deciding what measure to implement will no longer be tolerable,” Fuketa recently said.

Groundwater becomes contaminated when it flows into the buildings of the three reactors that suffered meltdowns in 2011 following the Great East Japan Earthquake and tsunami. Water that is used to cool the nuclear fuel debris is processed to remove radioactive substances, but the system cannot get rid of tritium.

These problems have forced TEPCO to store the contaminated water in hundreds of tanks installed at the Fukushima plant.

If more storage tanks are constructed, the overall capacity of 1.37 million tons at the site will likely be reached by the end of 2020.

Fukushima fishermen are already on alert for the one option they have already criticized--diluting the water and dumping it into the Pacific Ocean.

The economy ministry in 2016 said that measure could be implemented in the shortest time frame and at a low cost.

Fuketa has also said this is the most realistic option, but he noted that it would require years of preparation.

Some experts said the go-ahead for the dilution measure should have been given at the end of 2018 to start the process before the storage tanks reach capacity.

Economy ministry officials tried to explain various measures being considered at a public hearing in Fukushima in August 2018, including releasing the diluted water into the ocean.

“It will have a devastating effect on fishing in Fukushima,” said Tetsu Nozaki, who heads the Fukushima prefectural federation of fisheries cooperative associations.

Fukushima fishermen have slowly resumed operations since all forms of fishing were prohibited after high levels of radiation were found in fish caught off the Fukushima coast.

Fish auctions restarted at Fukushima ports in spring 2017, but the volume of fish brought in is still only about 20 percent of levels before the 2011 nuclear accident.

The last thing Fukushima fishermen want is an increase of negative publicity about their catches if the diluted water is dumped into the Pacific.

The government has spent about 34.5 billion yen ($309 million) to build a frozen underground earth wall around the three reactor buildings to divert the groundwater to the ocean. The “ice wall” has cut down the flow of groundwater, which at one time reached about 500 tons a day.

But still, groundwater continues to flow into the three reactor buildings at a rate of about 100 tons daily.

(This article was compiled from reports by Chikako Kawahara, Hiroshi Ishizuka, Toshio Kawada and Kazumasa Sugimura.)

A "long and bumpy" path to decommissioning