Breaker, breaker: How to conserve energy without thinking too much 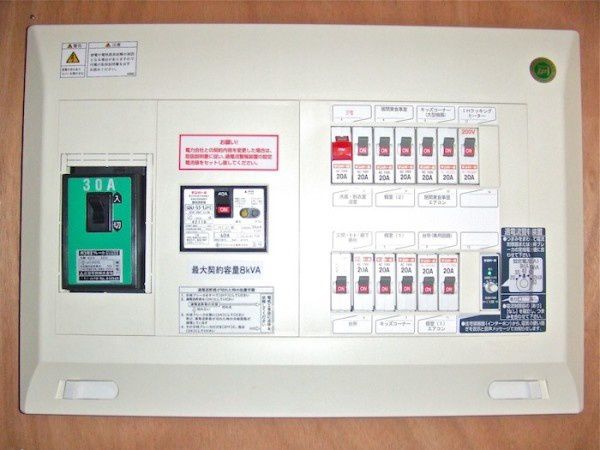 Last Monday the summer setsuden (electricity-saving) campaign started. All the regional utilities except Okinawa’s are requesting that customers cut back on their energy use so as not to put a strain on the grid, which has been compromised by the shutdown of so many nuclear power plants in the wake of last year’s meltdown at the Fukushima No. 1 reactors. As evidenced by the large anti-nuclear demonstrationstaking place, a lot of people have strong feelings about atomic energy, but whether you believe it to be too dangerous to handle or an acceptable alternative to carbon-based sources, the best way to address the more pressing issue of energy shortages is to reduce usage.

Though there are many piecemeal methods for saving energy, one way to immediately cut down is to exchange your main circuit breaker, the gatekeeper for the current that flows into your home. Power is measured by means of watts, and the number printed on your breaker, which stands for amperes, represents the maximum amount of wattage that can pass into your home at one time. Different household appliances use different amounts of power. Anything that cooks or produces heat will use more power than other appliances. When the amount of power flowing into your home exceeds the ampere level of your breaker, it automatically trips, causing a blackout, but only in your home. If you use a lot of electricity, then you should install a breaker with a higher ampere number.

There is an indication on the appliance and in the accompanying user manual of how many watts the device uses at a given time, though some experts say these tend to be inflated. If you want to know exactly, then buy a wattage monitor for anywhere between ¥2,000 and ¥20,000 at an electrical appliance store. You plug your appliance into it and it will tell you how many watts the device uses. Then, if you use the simple calculation of 100 watts per ampere, you can estimate which breaker level is best. A refrigerator, for instance, is on all the time and the average one requires 2 amperes on a continuing basis. A microwave or a rice cooker may require as much as 6 amperes, but they tend to only be used for short periods of time. An air conditioner starts off using a lot of power but eventually levels off to much less.

Utility companies will say you should add up all the amperes required by all your appliances to find out what level you need, but that is hardly a way to figure how to save because you aren’t going to use all your electrical devices at one time — or, at least, you shouldn’t. To make managing your appliances easier use switchable power strips — extension outlets with switches that cut the current to individual appliances.

According to Asahi Shimbun, there was a 50 percent increase last summer in the number of Tepco customers who requested replacement breakers, and though the report doesn’t specify how many increased their amperes and how many decreased theirs, we can probably assume the majority were in the latter category; given the setsuden push last year. One family profiled by Asahi stepped down from 40 amperes to 20, after which they experienced two blackouts because they used the toaster and the microwave oven at the same time. Now they have no problems because they understand how to balance their power usage. More importantly, they say they don’t feel inconvenienced at all.

What’s notable about this trend is that it was promoted by users, not utilities. When utilities talk about changing breakers, they frame it in terms of household economy — you can save money — not in terms of energy-saving. This seems odd since changing to a smaller breaker is a good way of compelling a household to pay closer attention to the amount of energy it uses. By the same token, having a larger breaker than what a household normally uses could lead to a waste of energy. If promoted on a mass scale, changing to smaller breakers could theoretically prevent the sort of regional blackouts the power companies say are likely to happen during peak usage periods this summer. If all households exchanged their breakers for smaller ones, then the grid would seem to be in less danger of momentary overload because those breakers will trip at lower usage levels. The point is that the resulting outage will only affect the individual household, not the grid. In this way, overall usage is checked.

But maybe that would be too much savings for the power companies. After all, they are profit-making organizations. Last week we called Tepco and asked to have our 40-ampere breaker exchanged for a 30-ampere one. Originally, we were thinking of alternating between a 20-ampere breaker for the summer and a 30-ampere breaker for the winter, since much of our heating is electric, but Tepco says you can only change your breaker once a year since that is the minimum period for a billing contract, so we settled for the 30-ampere. When we talked to the Tepco representative on the phone, she made a point of telling us that 30 might be too small. “You can’t use two air conditioners at the same time,” she warned. “We don’t have any air conditioners,” we said. She stopped talking.

Yen for Living is produced by Philip Brasor, a freelance writer-for-hire, and Masako Tsubuku, a freelance translator and interpreter. They are currently working together on a book about Japanese housing that will probably never be finished. In the meantime they have their own blog on the subject: Cat Foreheads & Rabbit Hutches. You can read more by Philip at philipbrasor.com.