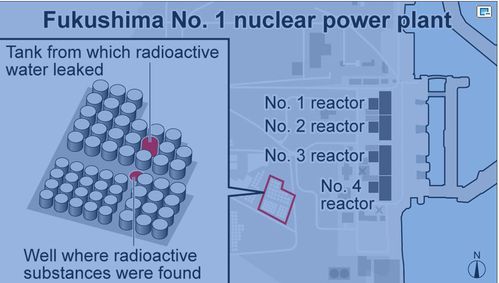 Highly radioactive water that leaked from a storage tank and was not discovered until last month is spreading underground at the Fukushima No. 1 nuclear power plant, Tokyo Electric Power Co. said Sept. 5.

The utility said 650 becquerels per liter of radioactive materials, which emit beta rays such as radioactive strontium, were found in water samples from an observation well near the tank, from which an estimated 300 tons of highly radioactive water were found to have leaked.

Strontium is believed to accumulate in bones in humans and can cause bone cancer and leukemia.

TEPCO first discovered the leak on Aug. 19, which is suspected to have started in July.

Although much of the contaminated water has apparently seeped into the soil and combined with groundwater, TEPCO's latest findings from the well are the first time the utility has confirmed that leaking water is spreading underground.

After the latest water leakage issue was exposed, TEPCO drilled the 7-meter-deep observation well one to two meters south of a site lined with tanks, including one where the water leak was discovered.

Near the observation well, there is a drain valve where 16 millisieverts per hour of beta rays were detected. Those levels are higher than those of surrounding areas. TEPCO believes the radioactive water leaked from the drain valve.

The tanks hold radioactive water generated in the process of cooling the crippled reactors. The contaminated water in the tanks has a concentration of 200 million becquerels of radioactive materials per liter.

The Nuclear Regulation Authority has rated the latest water leak accident at the plant as Level 3 (serious incident) on the eight-point International Nuclear and Radiological Event Scale.

TEPCO currently plans to pump groundwater from other wells on the plant site and release it into the sea before the underground water is contaminated by the leaked water. But those wells are located 130 meters on the seaward side of the observation well where groundwater contamination has been confirmed.

TEPCO said it will dig additional wells to investigate how far the radioactive water has spread underground.

Leaked toxic water at Fukushima plant may have mixed with groundwater

The detection of radioactive substances emitting strontium and other beta rays shows the possibility that toxic water from the tank may have reached the groundwater, the plant operator known as TEPCO said. About 300 tons of highly toxic water had leaked from the tank.

The utility said it collected the groundwater Wednesday at a well dug more than a dozen meters south of the tank in the H4 area where the radioactive water had leaked.

The radiation level of the groundwater, which has been found to be lower than that of the toxic water in the tank, may have been diluted by rain water, according to TEPCO.

The utility believes that leaked toxic water mostly seeped into soil and partly flowed into the sea through a nearby drain ditch. The amount of flow into the sea is unknown.

With the latest detection of radioactive substances, however, the water in some of the wells is feared to be contaminated.

Leaked water may have reached groundwater

The operator of the damaged Fukushima Daiichi nuclear power plant says radioactive water that leaked from a storage tank may have reached groundwater.

Tokyo Electric Power Company says it detected high levels of radioactive substances in water collected on Wednesday at a monitoring well about 10 meters from the tank.

It says the water contained 650 becquerels per liter of beta-ray emitting substances, including strontium. The water was taken from about 7 meters deep, where groundwater is flowing.

Last month, TEPCO discovered more than 300 tons of contaminated water had leaked from the tank. Company officials said some of the water may have reached the sea.