Listen to us too 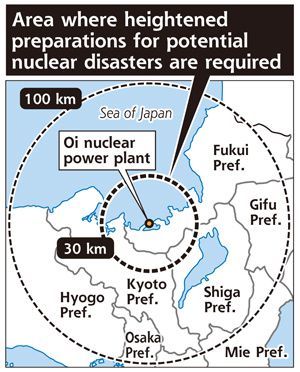 FUKUI--The focus in the issue of reactivating the two suspended reactors at the Oi nuclear power plant in Fukui Prefecture has now turned to the will of local governments around the plant, but the question remains of how many local governments should have a say.

Fukui Gov. Issei Nishikawa has said he will not make a hasty conclusion on whether to approve the restart of the Nos. 3 and 4 reactors of the plant, which is operated by Kansai Electric Power Co. Nishikawa added he has no specific timetable for when he will reply to the central government's request to approve the reactivation of the reactors.

Local government heads in neighboring prefectures, such as Osaka Mayor Toru Hashimoto and the governors of Kyoto and Shiga prefectures, remain opposed to the restart.

The central government has not clarified how much it will be guided by the opinions of local governments, making the path to a restart--critical to avoiding power shortages in the Kansai region this summer--increasingly unclear.

At a meeting with Economy, Trade and Industry Minister Yukio Edano held Saturday at the Fukui prefectural office, Nishikawa expressed his frustration with local governments around Fukui.

"For more than 40 years, Fukui Prefecture has earnestly dealt with various risks imposed by nuclear power plants--we have made continuous efforts to improve their safety. However, it seems regions that consume the electricity [produced by the plants] do not fully understand our hardships," Nishikawa said.

Nishikawa did not give specific names, but he was apparently talking about opposition from the heads of local jurisdictions with large populations, such as Hashimoto, to the restart of the nuclear reactors.

"The final decision should be made by the prefecture where the reactors are located," Nishikawa said at a press conference after the meeting with Edano.

Despite its cautious approach, Fukui Prefecture has also indicated a positive attitude toward restarting the Oi plant's nuclear reactors from the beginning. The prefecture is home to 14 nuclear reactors, the most in the nation, and expects to receive about 60 billion yen over five years in nuclear fuel tax from Kansai Electric and two other power companies.

According to sources, the Fukui prefectural assembly favors restarting the reactors.

A member of the Oi town assembly said: "The local economy will be hurt if the suspension of the nuclear power plant is prolonged. I have no reason to oppose resumption."

However, local governments adjacent to Fukui Prefecture are wary and want the central government to expand its interpretation of the "local consent" necessary to restart the nuclear reactors to include their voices as equal as those in Fukui Prefecture.

"I ask the central government to treat all areas that will be subject to potential nuclear accidents as 'local areas,' rather than deciding based on administrative boundaries," said Yuji Fujii, mayor of Nagahama, Shiga Prefecture. The city borders Fukui Prefecture on the north.

It is meaningless for the governments to discuss the meaning of "local consent" without considering such factors, Yamada said.

At Saturday's meeting, Nishikawa told Edano the government should directly persuade the "power-consuming areas" to go along with the restart of Oi plant's nuclear reactors. The remarks were apparently made to urge the government not to give great weight to the pressure from Hashimoto and other opponents and waver from its stance on restarting the nuclear reactors.

Edano said he would "sincerely respond" to the opinions of Kyoto and Shiga prefectures. However, he did not clarify whether he would give the opinions of local governments surrounding Fukui Prefecture equal weight to those of Fukui.

Observers have called the concept of "local consent" ambiguous. The criteria for deciding which local governments have a say in the restart of the Oi power plant's nuclear reactors could be the focal point in deciding the plant's future.