NRA plan to implement use of personal dosimeters no easy task 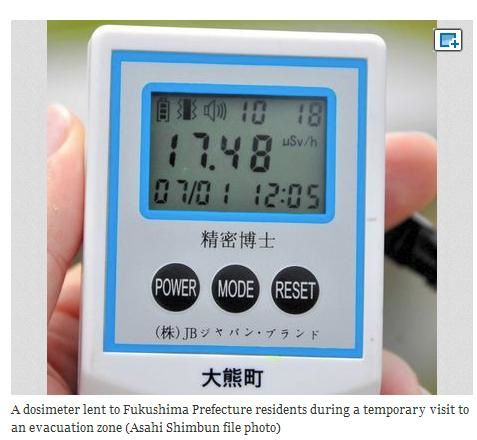 Japan's nuclear watchdog has recommended that people who evacuated after the Fukushima nuclear disaster in 2011 wear personal dosimeters once they return to their communities.

The Nuclear Regulation Authority explained Nov. 20 that its proposal would lead to new safety measures based on readings from personal dosimeters.

A number of obstacles stand in the way, however, such as how to measure personal doses and how to use that data to design ways to safeguard against radiation.

The NRA also called for the appointment of "facilitators," or advisers to evacuees who have returned home.

So far, the government has designed its post-disaster response--such as decontamination work and the lifting of evacuation orders--on the basis of estimates of airborne radiation levels.

If residents wear personal dosimeters, they will be able to quickly ascertain what actions bring about high radiation readings by recalling what they were doing at the time.

That would show residents what they need to do to avoid being in areas where radiation levels are high and which places should be decontaminated.

"It is essential for residents who return home to know about their own doses, understand how their whereabouts are correlated to the doses they receive, and take dose reduction, health management and other measures on the basis of their dose readings," part of the NRA recommendation said.

But many of the dosimeters that have been distributed to residents can only measure doses accumulated over several months. They do not enable users to figure out how their whereabouts are correlated to the doses they receive.

According to Cabinet Office officials in charge of assisting nuclear disaster victims, the government is contemplating the distribution of a new type of personal dosimeter that is adapted to measure hourly doses. The new dosimeters are compact, have long battery lives and can also provide weekly and daily average dose rates.

Some of the new dosimeters have already been distributed, on a voluntary and trial basis, to evacuees from the Miyakoji district of Tamura, Fukushima Prefecture, which is designated as a "zone being prepared for the lifting of the evacuation order," and other areas.

Makoto Miyazaki, a research associate of radiation health management with Fukushima Medical University, carries one. He said the new dosimeter enables him to tell time variations in his doses, which tend to be lower during the day when he is at work, than at night when he is at home.

Dose readings need to be rendered graphically on a chart by using computer applications to be easily understood.

"To use the readings as an aid for designing safety measures, there should be people who can communicate the results in an understandable way," Miyazaki said.

The Environment Ministry has requested 670 million yen ($6.7 million) in budget allocations for the next fiscal year for a program to distribute dosimeters to 4,200 residents from areas designated as "zones being prepared for the lifting of the evacuation order."

The appointment of facilitators, included in the NRA recommendation, would not be easy. It remains unclear from where the advisers will be recruited, and how many people will be trained and eventually appointed.

"Government assistance to the facilitators will be indispensable," said Shunichi Tanaka, NRA chairman, at a Nov. 20 news conference. "Trial and error is our only option."