NRA reveals cesium readings for seabed off Fukushima No. 1 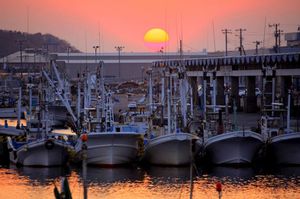 The Nuclear Regulation Authority has disclosed the results of its fiscal 2013 research into seabed radioactivity off the leaking, heavily damaged Fukushima No. 1 power station.

Ocean soil collected about 6 km away from the crippled power plant, run by Tokyo Electric Power Co., contains as much 2,000 becquerels of cesium-137 per kilogram. The half-life of cesium is about 30 years.

The nuclear watchdog said Friday that it is difficult to assess the figure because there is no standard to compare it with. The NRA said it will continue its research.

The March 2011 mega-quake and tsunami triggered three core meltdowns at the aging, poorly protected power plant that polluted much of Fukushima and other parts of eastern Japan with radiation.

About 4 km off the facility, soil with 1,000 becquerels of cesium-137 was collected from about 20 locations, the NRA said, noting that soil tainted with cesium tends to accumulate in depressed places.

The seabed distribution of the isotope roughly matched the findings of the Fisheries Agency, which conducted similar research in fiscal 2012, the NRA said.

Cesium-137 was particularly high near the mouth of the Abukuma River, which flows through Fukushima and Miyagi prefectures. The highest reading found was 2,700 becquerels in soil 2.5 km east and 2.3 km south of the river’s mouth in Sendai Bay. But cesium concentrations in the areas did not fluctuate much during the year, the NRA said.

The research, conducted by the University of Tokyo and the National Maritime Research Institute, covered a 1,000-sq.-km area off the Fukushima No. 1 plant as well as areas around the Abukuma River.