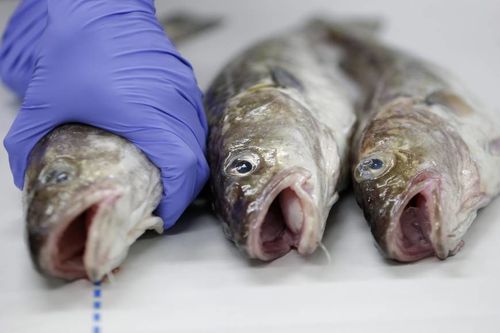 Troubled waters?: A worker holds a fish during an analysis of radioactive materials in the specimen at the Marine Ecology Research Institute's central laboratory in Onjuku, Chiba Prefecture, in December. Leaks of contaminated water into the Pacific Ocean from Tokyo Electric Power Co.'s Fukushima No. 1 nuclear plant, damaged in the March 2011 earthquake and tsunami, have raised questions about the safety of eating seafood caught off Japan. | BLOOMBERG

Tokyo Electric Power Co. did not tell the public until recently that massively high levels of radiation were found in groundwater collected last July at the Fukushima No. 1 nuclear plant, even though the utility was aware of the data that month, according to sources.

Tepco released the data on Feb. 6 showing that the groundwater contained a record 5 million becquerels per liter of radioactive strontium-90.

When Tepco reported the data to the Nuclear Regulation Authority last week, it initially claimed that it had only recently compiled the data, NRA sources said.

However, the embattled utility later corrected the timing, apparentlyshowing that it had withheld the record readings, the sources said.

The withholding of the radiation data looks to be the latest in a long line of missteps for the utility, experts said.

Regulators are expected to demand a detailed explanation from Tepco, the sources said.

According to the NRA and other sources, Tepco first said it had detected 900,000 becquerels of beta ray-emitting radioactive materials, including strontium-90, from the groundwater last July.

When the firm later measured levels of strontium-90 alone, it found that the groundwater contained 5 million becquerels.

But Tepco concluded at the time that the data were inaccurate, citing the huge difference in the two measurements, despite knowing that its method of measuring beta ray-emitting materials could show lower-than-actual levels, the sources said.

Because the utility has repeatedly changed its explanations, the NRA secretariat has asked it for more detailed information.

Tepco claimed that although the company was aware of the data last July, it released them only recently after its accuracy was finally confirmed this month.

Previous reports said Tepco belatedly revealed last year that some 300 tons of groundwater was flowing into the sea daily, after mixing with radioactive water used to cool the plant’s three stricken reactors.

Tepco had been trying to gain the consent of local fisheries groups to discharge excess water into the sea, after promising to reduce its radiation levels.