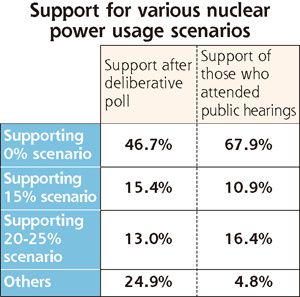 The government's executive committee, which conducted a deliberative opinion poll on mid- and long-term energy policies in April and May, said Wednesday that 46.7 percent of respondents supported a scenario in which nuclear power generation would cease.

In the poll, which asked about the percentage of energy to be generated by nuclear power as of 2030, the largest portion of respondents favored the zero percent scenario among three presented by the government.

Those who favored the zero percent scenario were nearly 70 percent of participants in earlier public hearings and other occasions in which attendees voluntarily gathered.

But the percentage of zero percent scenario supporters did not reach 50 percent in the deliberative poll.

The poll surveyed 285 randomly selected people from among 6,849 who responded to prior telephone surveys.

The participants gathered in Tokyo and participated in the deliberative poll, which comprised group discussions and interpellation with experts.

The government committee analyzed the results of telephone surveys and three questionnaires taken before and after the deliberative poll.

In the telephone surveys, 32.6 percent supported the zero percent scenario. But the percentage increased before and after the deliberative poll.

Among those who favored the zero percent scenario after the deliberative poll, 96.2 percent cited safety as the reason.

The result of the deliberative poll, along with results of prior public comments and public hearings, will be considered by the government in setting mid- and long-term energy policies to be compiled by the end of this month.

The deliberative poll aimed to obtain an informed public response the objectivity of the public as the randomly selected people were asked for their opinions after sufficient discussions and explanations.

However, it remains doubtful whether the poll result can be seen as a neutral "public opinion."

The participants in the deliberative poll are viewed as being highly interested in the nuclear power issue. Some of the participants said after the discussions that the debates were influenced by those who spoke more loudly than others.

The government committee explained that the reason the percentage of zero percent scenario supporters increased was that safety measures and other tasks were made clear.

The government should carefully consider effects on the economy and maintaining technological capabilities. They also must consider business groups that have voiced concerns.

It cannot be wise to decide important policy decisions, which will affect the future of the nation, through popular vote.

Nearly 50 percent of respondents to a government survey say they want to completely get rid of nuclear power generation in 2030.

The views of 280 participants were collected before and after the debates. Respondents were asked how much of Japan's total energy supply should be generated by nuclear power in 2030: zero percent, about 15 percent, or 20 to 25 percent.

Forty-six-point-seven percent of the respondents said after the debates that Japan should completely get rid of nuclear power. That figure represented an increase of 14 percentage points from before the debates.

Fifteen-point-four percent of respondents said after the debates that nuclear power should account for 15 percent of total energy generation. That was down more than one percentage point. Those who support a 20 to 25 percent share of nuclear energy stayed unchanged at 13 percent.

Asked what they consider to be the most important factor in formulating energy policy, 76.5 percent cited ensuring safety. Forty-point-four percent said a stable supply of energy, and 16.1 percent cited costs.

The government plans to assign a panel of experts to analyze the results and consider how to incorporate the findings into a new set of energy policies.

The outcome of the "deliberative polling" survey showed that the more participants were informed on energy issues, the greater their support for reducing Japan's nuclear reliance to zero by 2030.

It is the first time the government has conducted an opinion poll on the future role of nuclear power since last year's Fukushima Daiichi nuclear power plant disaster.

Keio University professor Yasunori Sone, who headed the committee organizing the survey, said at a press conference that a large portion of participants hoped the country would withdraw from nuclear power generation despite "knowing that they (would) have to confront a rise in (electricity) costs as a result of an increase in reliance on renewable energies, and a change in lifestyle."

To assess the numerous opinions it received through the survey and other methods, the government held its first meeting with the experts the same day as it plans to have the results reflected in a new energy policy that it has been working on.

But with some quarters of the ruling Democratic Party of Japan and the business circle opposed to the idea of abandoning nuclear power generation, it is still uncertain if the government will come up with an energy policy that clearly seeks the end of the nuclear power.

In addition to the deliberative polling, the government solicited opinions from the public via fax and the Internet, and held opinion sessions nationwide over the past month or so, asking for people's opinion on how reliant Japan should be on nuclear power by 2030.

The government-proposed options are zero percent, 15 percent and 20 to 25 percent of total power generation -- compared with 26 percent in 2010.

Of a total of 89,124 comments the government solicited between July 2 and Aug. 12, the government said it has so far created a tally of about 7,000 and found about 90 percent supportive of zero nuclear reliance.

National policy minister Motohisa Furukawa said at the opening of the meeting with the experts that the nation's energy policy used to be compiled through consultations with experts. But this was the first time for the government to work in a way that reflected public opinion in formulating an energy policy.

"We'd like to analyze the opinions we received fairly and neutrally, while ensuring transparency," he said.

The deliberative polling involved a two-day discussion event through Aug. 5 among some 290 randomly selected people, whose opinion was checked three times -- before, during and after the debate.

The poll showed that the portion of people who attach paramount importance to safety increased from 67 percent in the first survey to 76.5 percent in the third and final survey, higher than those who seriously regard energy security and cost issues, said the survey organizing committee.

Meanwhile, the percentage of people who supported the zero nuclear reliance option stood at 32.6 percent in the first survey. It increased to 41.1 percent in the second survey after participants were asked to study distributed materials, and rose again to 46.7 percent in the third and final survey.